My head is spinning after 36 hours of theater-laden experiences. I know -- I saw six or seven shows a day for days running when Wendi and I went to the Fringe Festival in Edinburgh.  But watching a show and listening to directors, actors and others involved in the production are different experiences. And the anticipation of seeing these shows adds to the excitement.  Read on for a brief recap. 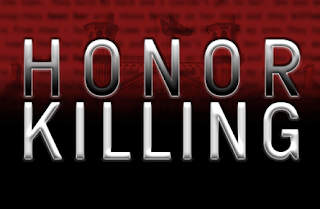 "Honor Killing" at Florida Studio Theatre -- I have missed taking the Behind the Scenes class at FST this year, but am thrilled to have time to watch this show go from the page to the stage. "Honor Killing" is a world premiere and deals with an American reporter's coverage of the stoning of a Pakistani woman by her family for daring to marry someone other than the family's choice. The topic is an interesting one, but what really has me excited is seeing the technological aspects of the show come together.

Because the American reporter has been denied entry to Pakistan, she is sidelined in Dubai. As a result, much of the dialogue between the characters takes place via Skype or text messaging. Video will be used in the show as well. Production Manager Bruce Price is tasked with not only overseeing the set, costume, lighting and sound designs, but ensuring that FST has the technology in place to make the show happen.  Seven 55' televisions have been purchased to be embedded in panels across the stage.  (Six are required, but he doesn't want to end up with a dead screen and no replacement with two hours to go until showtime.) The panels will be covered with scrim so they will only be visible when the screen is active. A special software program is on order that will be enable one computer to send signals to the six different screens. A switcher--common to TV stations but not so much for theaters--will also be required. Not surprisingly, FST has brought in a specific production designer who's an expert in working with the technology. Stay tuned for more on this show as my class progresses.

"Roe" at Asolo Repertory Theatre.  I have been eagerly awaiting this production since I learned the fabulous Terri Weagant will be playing Norma McCorvey (aka Jane Roe). Sarasota audiences last saw Terri in Urbanite Theatre's production of "Bo-Nita." Her performance in the one woman show was nothing less than a tour de force.

﻿
Director Lavina Jadwhani and Terri talked about "Roe" at an Inside Asolo Rep panel discussion. Of course, we all know the decision in the case (if not how it will play out over the years).  Jadwhani, who's been involved with the play since its 2016 premiere at the Oregon Shakespeare Festival, noted that the political climate during the show's various productions has affected audience reaction. At OSE, "Roe" felt like an earnest look at a slice of history. At Arena Stage in D.C. in 2017--just days before the inauguration--the play had developed a sense of urgency. It's yet to be determined how the play will hit Sarasota audiences, but to Jadwhani it feels as if we are in the thick of things.

Terri talked about the challenge of setting aside your own point of view when stepping into the shoes of a character. While she thought she had come into the production with a totally open mind, she realized she was judging McCorvey on occasion. (I am not familiar with McCorvey's background, and Terri and Jadwhani's comments about her "shifting" perspectives made me even more eager to see the show.) I appreciated her candor about the struggles of playing McCovey, whom she calls an "unreliable narrator."

"Rhinoceros" at Asolo Repertory Theatre. The panel discussion also included director Frank Galati and actress Peggy Roeder, both of whom are at work on the production of Eugene Ionesco's "Rhinoceros." The Tony-award winning Galati is closely associated with Steppenwolf Theatre in Chicago, although he directs at least one show at Asolo Rep each season. Roeder is a favorite with Asolo Rep audiences.
﻿﻿﻿﻿
When asked to place Ionesco's absurdist play in context, Galati had no difficulty. The play was written in 1959 and deals with the aftermath of WWII.  Galati said the play comes from Ionesco's belief that "there is no reason, order, logic or harmony in the universe, despite the beauty of nature." To quote Ionesco, "What is the world if not absurd?" Galati compared the all-encompassing feeling resulting from this outlook to a man asleep in his bed that suddenly disappears into the void of a sinkhole. (The audience appreciated the Florida analogy.) He noted the power of the theater to encourage audiences to look at issues in a new way.

While the discussion could have gone on for hours, the panel members had other places to be. Roeder had to dash to don her fabulous Queen Elizabeth costume for the matinee performance of "Shakespeare in Love." And for that matter, so did I, since I had tickets for the matinee. The show is a blast, and it was particularly fun to see Roeder's transformation into an imposing Queen Elizabeth wearing hands-down the best costume in the show. (For a reminder of what that costume looked like, click here to read about the costume designer brunch.) 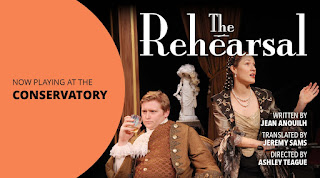 Other theater notes:  Dorrit and I took in the Asolo Rep Conservatory production of "The Rehearsal" last week-end, and I highly recommend it. It boasts a terrific set and costumes and strong performances all around in a story with a surprising emotional range. The show runs through March 11, and tickets are only $30. 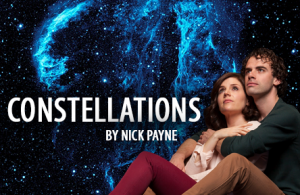 This week-end's theater outing is to FST's "Constellations," the second in its Stage III series. The series is dedicated to more "challenging" shows--due either to content or form-- than those produced in FST's larger theaters. "Constellations" is a play about "an encounter between a man and woman that leads to a spellbinding journey into time and space" and falls firmly into the second category. It sounds like a great theatrical adventure.