"Shakespeare in Love" at Asolo Rep -- the Costumes

"Shakespeare in Love" is the first of Asolo Rep's repertory productions to hit the stage this season. Like "Evita," its story will be familiar to many audience members. After all, the star-studded movie by the same name won seven Academy Awards, including Best Picture.

The film practically cried out for a theatrical adaptation. Lo and behold -- the play premiered in London in 2014. The show has now made its way to Sarasota with director Rachel Rockwell and costume designer Susan E. Mickey. Both women were part of the show's production at Chicago Shakespeare Theatre last year.

Dorrit and I attended a costume designer brunch at which Mickey spoke. Hearing her insights -- and getting up close and personal with some of the show's costumes -- was a real treat. 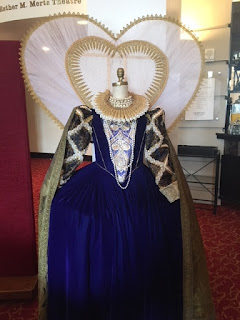 Mickey talked about the challenge of working on a show that has a "visual history." "The audience will come into the show with certain expectations," she said. "It might be great in jeans and t-shirts, but that could create a hurdle to getting into the show." And so Mickey went full out Elizabethan with her costumes.

Sometimes, Mickey said, she actually went a bit too far. She called her vision of Queen Elizabeth's gown "extreme Shakespeare."  "Go big or go home," she said with a laugh. The lush costume includes a farthingale cage, a bum roll and lots of bling. It's an outfit truly befitting a queen.

But there was one problem. During dress rehearsal, they realized the heart-shaped ruff collar was so large it blocked out some of the actors. And so our Queen will appear onstage without this part of her wardrobe. 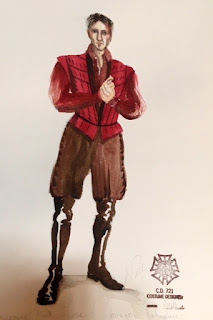 The men in the show will have two different silhouettes. The older, higher class characters will wear traditional pumpkin pants. It's not hard to figure out how the style got its name.

Will and the other men creating the story, however, will wear a more slimmed down look. It's all the better for the sword play in the show.

Mickey walked us through Will's costume, which will be seen in various iterations. The jacket -- made from three types of leather -- features doublets at the shoulders to tie in the sleeves. Little wings hide the ties for a finished look. In some scenes, the leather sleeves will be stripped away, leaving Will wearing a vest with a blousy shirt. 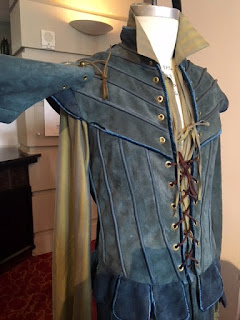 The seams in the costume are both authentic to the period and help the clothing fit and move with the actor. Both the shirt and the jacket lace up and will have to be adjusted throughout the show's run.

The costume is completed with knee-high boots. Mickey shared that the popularity of Renaissance fairs has made sourcing boots and other Elizabethan wardrobe components much easier than it used to be (not to mention more affordable).  Custom made leather boots would have run around $1500/pair. The boots the cast will wear run between $80-$100.

But they weren't good to go out of the box. The backs of the boots were split and grommets sewn in so they could be laced tight. Like the shirt and jacket, some tweaking will be required for each performance. Cushioning in the soles was also added for fit and comfort.

The best question from the audience came when someone asked, "Did men wear underwear in those days?" The answer -- not exactly.  Instead, they wore a piece of fabric external to their trousers called a codpiece. It tied in and provided some support while enhancing the man's package (for lack of a better word). Click here for a funny article about this specialized garment. Mickey noted she dispensed with this bit of authenticity for "Shakespeare in Love." 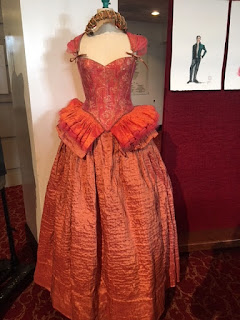 And then there's Viola. The dress shown here is the one in which she will make her first appearance onstage at the ball. Many of the female characters will wear peplum skirts, but none, Mickey said, are "as sassy" as this one. The pieced and corseted bodice accentuates the look.

The damask, brocade and velvet fabrics used in the women's costumes are downright luxurious. So perhaps Mickey's mention that fabric was often part of a woman's dowry in the day shouldn't have come as a surprise. A nice piece of linen was highly valued.

I suspect the number of layers of clothing women wore at this time pretty much eliminated any real comfort. In one scene, Viola will undress onstage so audience members get a sense of the amount of clothing involved.

All too quickly, our time with Mickey was over.  I'm looking forward to seeing "Shakespeare in Love" even more knowing a bit about what went into bringing it to the stage. The show will run at Asolo Rep through March 28 in repertory with "Morning After Grace" and "Rhinoceros."  Click here for more information and tickets.