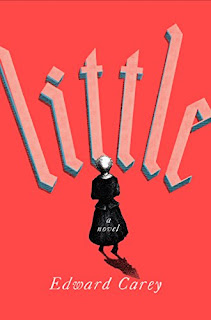 Most likely, you've come across a Madame Tussaud's Wax Museum at some point in your travels. If you're like me, you were initially intrigued/impressed, but quickly began to view the wax sculptures as kitsch. But think back to the 18th century, a time before photography -- much less the internet -- existed. This is the world Edward Carey drops us into in "Little," his novelization of the life of the girl who became Madame Tussaud.

Truthfully, I didn't realize the book was about Madame Tussaud when I purchased it. It was Carey's wonderful (and sometimes gruesome) illustrations that led me to pick up his novel. I was all in from the preface, which promises "lost children, lost parents, ghosts of monkeys, tailor's dummies...the man who was shop dolls, his mother a mogul, the man who collected murderers...scenes of historical import...massacres of innocents, murders witnessed, bodies taken apart, blood on the streets, misery, prison, loss of everything, marriage, memories captured and contained, calamity daily exhibited, history owned."  It's all in there -- and then some.

Each chapter sets out a timeframe and Marie's age during the period. She is a charming narrator and helpfully highlights key events in the upcoming chapter. The real story gets under way in Book One -- 1767-1769 (A One-Way Street -- "Until I am eight years old.") Marie describes the action in Chapter Three as "in which my mother and I are introduced to many wonderful things, some of them in rosewood cases, and I come to witness my second death."

Sadly, the deaths that she witnessed were those of her parents. After her father died, young Marie (known as "Little" due to her diminuitive stature) and her mother headed to Berne to housekeep for Doctor Curtius. His home and occupation so freaked out Marie's mother that she hung herself.

What, you might ask, could be that dreadful? Curtius was fascinated with the human body. His atelier was overflowing with body parts. The fact they were made of wax did not assuage the horror Marie's mother felt.  But to Marie, a new and exciting world had opened its doors.

Curtius takes Marie under his wing and teaches her his trade. Marie learns that Curtius' work extends beyond creating wax sculptures of organs. He also crafts waxen sculptures of clients' heads. When Curtius decides to leave Berne for Paris, Marie begs to come. She reminds him of her unusual resume. "I can smooth people's faces down, I can put straws up nostrils."

"Something has happened," Curtius responds. "Something extraordinary. Just as the smaller radius bone is fused to the taller ulna, just as the fibula is to the tibia: we are connected. You and I....I shall not do without you."  (Yes, this is a man who has a somewhat limited frame of reference.)

So the pair head off to Paris where a ridiculous number of adventures await them. They move in with a widow and her extremely strange son Edmond (with whom Little becomes enamored). Curtius' waxen portraits are new to Parisian society and are a great hit.

But all businesses must evolve. Curtius lands upon the somewhat grisly idea of sculpting the heads of murderers. Keep in mind that in order to do this, the actual head must be obtained. Conveniently, the guillotine was the instrument of choice for putting criminals to death.

The widow, whose husband was a tailor, decides to put the wax heads on mannequins and costume them. The exhibit becomes so popular the group move to a much larger space (that happened to be the previous home of a bunch of monkeys). The precursor to Madame Tussaud's Wax Museum had come into existence.

The story of Little is so crazy that it's hard to believe even a portion of it is true. It's thought, for instance, that Marie may have lived at Versailles and served as the art tutor to a young Elisabeth of France, sister to Louis XVI. Carey embraces this possibility in "Little," sending Marie off to live with the Royal Family. And who not? It gives readers a peek into their lifestyles and customs.

Frankly, I don't care how closely Carey's story aligns with history, as he's written an original, creative and thoroughly enjoyable book. But "Little" is more than a fun ride. It's the story of  a girl who is called upon to muster her inner resources time and time again. While Marie may have been small in stature, she is large in heart, mind and commitment to survive and thrive. I couldn't recommend "Little" more highly.