The New World by Chris Adrian and Eli Horowitz


For the past 12 years, the Morning News has run its Tournament of Books. It's a competition that, in their own words, is stupid.  "Books aren't basketball players," the website points out. "Stories don't care about other stories....The Tournament of Books (ToB) is actually less an award or event, more a long heated chat about books and reading and writing and what makes literature good or bad or something in between."

In years past, I've taken a look at the list of books with interest and a vague idea that I might try and read along. The brackets (hence the reference to basketball) are announced late January, with the one-on-one competition between books kicking off in March. But who has the time? This year's list, though, contained two books I'd already read -- Lauren Goff's Fates and Furies (loved it) and Hanya Yanagihara's A Little Life (confused about all the hype). I decided to read a couple of other books on the short list.  And so I discovered The New World by Chris Adrian and Eli Horowitz. 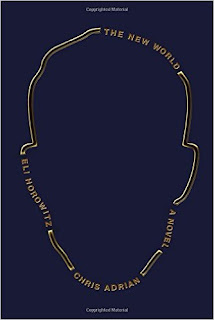 The premise of the book is, admittedly, odd.  Jane is a pediatric surgeon who's been away at a conference. When her flight lands and she turns on her phone, there are dozens of texts and voicemails about her husband Jim's collapse.  Her seatmate clears the way for her to get off the plane, to the front of the cab line and into a taxi where she wishes the driver had a siren to deliver her to the hospital more quickly.  "She imagined rolling down [the window] and making a wailing siren of her mouth and her head, and she could see the cartoon image very clearly -- her neck stretched impossibly long and her eyes flashing and spinning, one red and one blue, her lips oversize and overdefined, wrapping sensuously around every howling O up the Grand Central Parkway and clearing a path."

When Jane arrives at the hospital, she learns that her husband has died.  And here's the odd part--his head has been taken away to be cryogenically frozen. Unbeknownst to her, Jim signed on with Polaris, a cryogenics company, to be part of the future.

The balance of the slim novel alternates between Jim navigating his new world (hence the title of the book) and Jane trying to come to terms with Jim's decision.

"Greetings and salutations!" Jim's (social worker) tells him. (Parentheses are used around words to indicate they are not quite right for the future but represent concepts the recently deceased can understand.)  Jim, in his current iteration, is stunned to learn that he is alive in some sense. "You have always been alive," he is told, "But now you are awake." But in order to fully reconstitute himself, he has to try harder. "Jim noted the absence of eyelids to shut tight, or hands to squeeze into fists, or buttocks and a jaw to clench--everything he was accustomed to doing when he was really trying at something.  Instead, he tried to muster their interior equivalents...an effort like internal pooping."  (Jim had used this analogy in the past as he thought about his attempts as a humanist chaplain to pray.)

Meanwhile, Jane is also in contact with the Polaris people, who express sympathy for her "perceived loss." She just wants her husband's head back.  Without it, "..it felt somehow like Jim had left her for somebody else, like infidelity added to death."

I want to go on sharing passages from the book that made me sit up and take notice of the words and the ideas behind them. But you should discover for yourself the emotions this book both reports and evokes. There's humor and sadness and the joy of real love. And despite my desire to let you find the parts of the book that speak to you, there's one more excerpt I can't resist sharing. At one point Jim is talking about Jane to Alice, his (social worker), and says, "Who cares about love? That's the easy part.  It's only the first part. We were in life together, Alice. We were in life!" What a simple yet powerful way to describe their relationship.

Ultimately, The New World is a story not about cryogenics or the future but about a marriage. I'm curious why it's not up against Fates and Furies in the Tournament of Books. Regardless, I'm looking forward to reading the tournament commentary on this book, which I'm heartily rooting for to win. And I'm appreciative of the ToB introducing me to The New World, a novel I'm fairly certain I never would have found on my own.  Read it!
at February 14, 2016