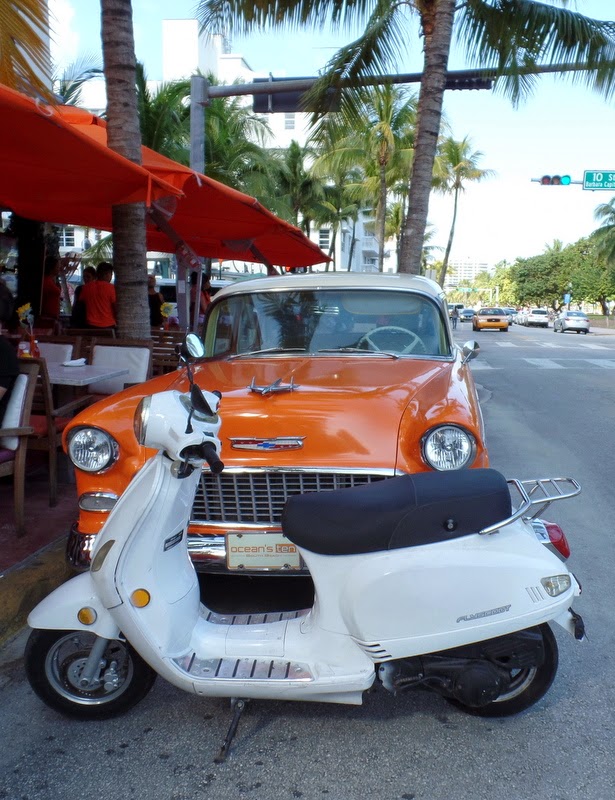 I never thought I'd be one of those tourists getting off a bus and gawking at the sites around me.  And yet I found myself doing just that last week when I went with a group from the Visual Arts Center to South Beach to tour the Art Deco district.  The event was part of our 2014 Fine Arts Festival entitled "Sensuality Meets Symmetry: Art Nouveau to Art Deco."  (Art Deco being, of course, the "symmetry" part of the equation.)  It was a blast.

The moment we rolled into town, I knew I wasn't in Kansas any more.  Latin music blared all around us.  Beautiful young people strolled the streets (many wearing swimsuits -- and we're not just talking the women).  Restaurants beckoned from every nook and cranny.  And then there was the gorgeous Art Deco architecture we were there to see. 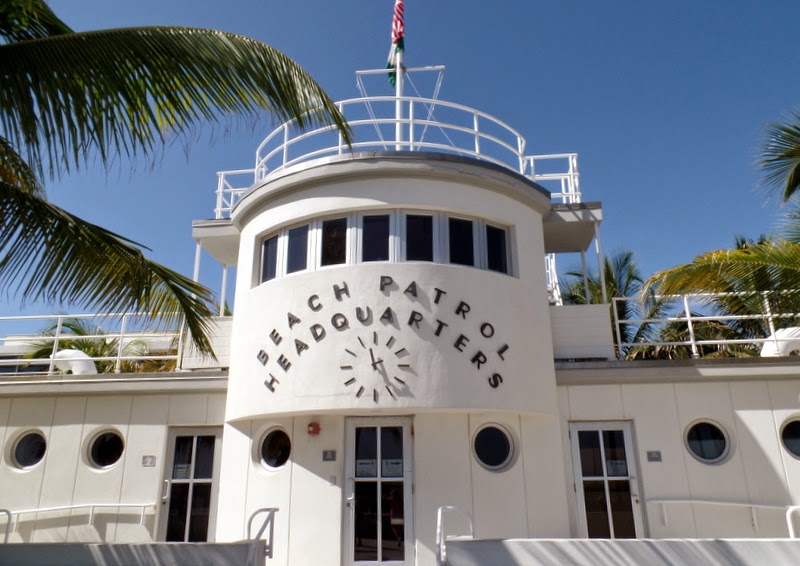 We started at the Miami Design Preservation League's Art Deco Welcome Center right on Ocean Avenue (and just steps from the beach). Our tour guide, Maureen, gave us an overview before we started the tour proper.  I never knew that Miami Beach had no beach when it was first developed.  It was just mangroves and water.  So all of South Beach is man made (as, Maureen aptly pointed out, are many of the women's bodies!) Or that during WWII, the Army Air Corps rented the hotels on Ocean Avenue to house more than 500,000 cadets who came through the training program there. (The local golf courses were turned into landing strips for the training exercises.)

The information came at us fast and furiously as we walked around Ocean Avenue.  Our first stop was Beach Patrol Headquarters built by Robert Taylor in 1934.  It's a terrific example of Nautical Art Deco, with porthole style windows, a captain's bridge, piped railings and curved air vents.  Before the MDPL built its headquarters between Ocean Avenue and Beach Patrol Headquarters, it apparently looked like an ocean liner that had run aground.  (I'm not sure why that was an appealing design style!) 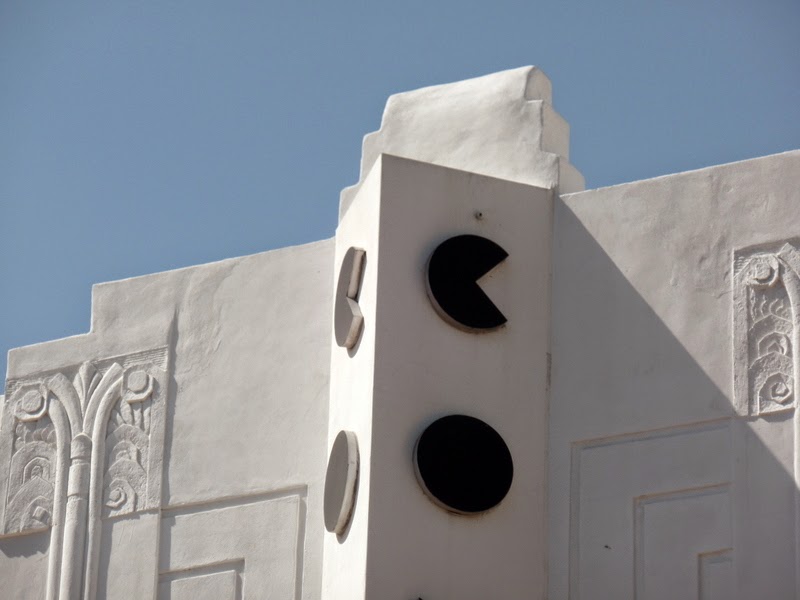 The Congress Hotel is still in business and is now comprised of four separate buildings with different architectural styles. The original building is straight up Art Deco, with its ziggurat (step down) details and "frozen fountain" reliefs.  Other Art Deco features include "eyebrows" over its windows and many geometric patterns.

Maureen explained a bit about what it means for a building to have a historical designation.  "The facade is all," she said.  Preservationists realized early on that the Art Deco district needed to thrive economically in order to survive. And so while owners of historic buildings are required to keep the exteriors as they were originally constructed (with repairs made using authentic materials), they have the freedom to do whatever they want in the inside.  As a result, you might stand across the street admiring a perfectly restored Art Deco building and then wander in to find decor like this tropical beauty. 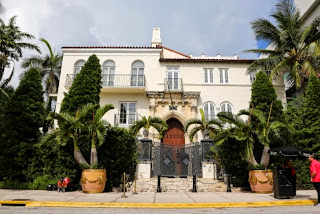 While South Beach is known for its Art Deco, there are other styles of architecture there as well.  This Mediterranean Revival home is the third most photographed residence in the United States (after the White House and Graceland).  But it's not the Moorish influences found in this building that create its fame.  It was here that designer Gianni Versace was gunned down in 1997.  The building was sold in 2013 for $41.5 million and made into a luxury hotel.  There are bouncers at the door to make sure you don't get any further than the entryway without a reservation.  (If you're interested in seeing some photos of the interior, check out this article from the New York Daily News.)

The Miami Design Preservation League guides did a wonderful job sharing a bit of South Beach history with our group.  I feel like I've just scratched the surface, though.  In addition to the Art Deco tour we enjoyed, MDPL offers self-guided Art Deco tours, guided MiMo tours (MiMo being Miami Modern) and even a South Beach for Foodies tour.  And of course they host the annual Art Deco week-end, which will be held next year from January 16-18.  As our favorite former governor of California would say, "I'll be back."