My friend Bruce has officially become a shutterbug.  He got a fancy camera and is busy taking photography classes at the Visual Arts Center in between lots of self-instruction from the web.  A couple of weeks ago he mentioned that he and Dorrit would be participating in the Worldwide Photo Walk and invited me to tag along. How could I refuse?

The Worldwide Photo Walk, sponsored by Canon, is in its sixth year.  On October 5th, 1238 photo walks were held around the world, with over 28,000 participants.   The concept behind the Walk is for photographers to rendezvous, snap some shots, and then retire to a watering hole to discuss the experience and share their photos. The event is a competition as well, with a winner and ten honorable mentions.  Just to give you a sense of the caliber of photographer that participates in this event, here's a link to last year's winning pictures:  http://worldwidephotowalk.com/2012-best-photos/ 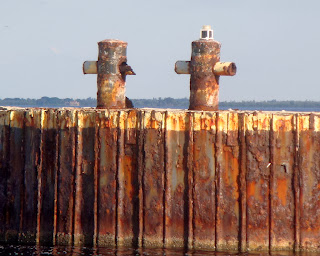 Our walk was led by VAC photography instructor Spencer Pullen, a five year veteran of the event.   Our location was beautiful Boca Grande.  Approximately 35 photographers met by the lighthouse where we were given very loose parameters for our outing.  We were allowed to shoot anywhere on the beach or in town.  The only requirement was that all pictures had to be taken between the 5 p.m. start of the walk and its 8 p.m. conclusion.

It is a wholly different experience to go out into the world with the intention of taking interesting pictures than to stumble upon a scene that cries out, "Take a picture of me!"  (My friend Maggie aptly referred to the latter as being an "accidental photographer.")  I felt slightly ridiculous pulling out my point and shoot while many of the other photographers had not only cameras with all kinds of expensive lenses but tripods (which somehow ratcheted things up a notch).  I was clearly out of my league and glad that this was not an occasion when my competitive instincts had kicked in. 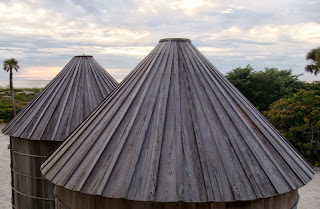 The time passed quickly, and it was an interesting exercise.  I first gravitated down the beach towards a dilapidated pier with old phosphate bins.  I can't say why I liked the scene other than that its worn and uncared for appearance seemed disconsonant with upscale Boca Grande.  As I began walking around, I became somewhat obsessed with these two water towers.  Again, I have no idea why they struck me -- perhaps the geometry, perhaps the fact that I like wooden structures-- but I came away with lots of pictures of them from all different angles.

I've given myself  a B+ for my "best" photo idea but, sadly, a D for execution.   While walking around an administrative building looking for a good vantage point to take some pictures of the beach, I began peering through the windows into the offices.  I discovered this sumo wrestler on one of the desks, along with some action figures.  They were hilarious, and I am very curious about the person whose desk is home to this little guy.  When I was working, I often had fresh flowers on my desk and maybe a photo or two.   I can safely say that the thought of having a small sumo wrestler in my work space never crossed my mind.   Inquiring minds definitely would like to know.

The walk was timed to coincide with sunset but the weather wasn't particularly cooperative.  It was a cloudy afternoon, and the sun "set" without any of the fireworks that we had been hoping for.  This is when Bruce's superior equipment really came into play.  He started what he is calling his "Lucy and Ethel" series featuring, you guessed it, Dorrit and me.   Keep in mind that this picture was taken between dusk and dark.  Even having been there, it wouldn't be too hard to persuade me that we are actually sitting in front of a beautiful backdrop of an ocean.  Pretty amazing stuff.  Next to us, another photographer had set up his tripod and was taking pictures of a woman doing yoga poses on the concrete ledge that Lucy and I had plopped ourselves down on.  (One of her poses was a headstand -- on the concrete -- that she held for a couple of minutes.)   I would love to see those shots.

None of my shots are worthy of submitting to the Flickr website that Spencer put together for our group, much less to the actual competition.  If you're interested in seeing what people have posted on the Flickr site, go to http://www.flickr.com/groups/2013-worldwide-photowalk-boca-grande-florida/    I think you'll be impressed.

While the outing confirmed that I haven't missed my calling as a photographer, I am already looking forward to next year's walk.   We'd love to have you join us.   If you're not in the area, check out the Worldwide Photo Walk website and find a walk that works for you.   It's free, fun, and a great opportunity to look at things around you with a slightly different perspective.