As I've gotten older, I often catch a glimpse of myself in a mirror or a shop window and think, "Who is that person?"   Like many people, I envision myself about 20 years younger and as full of life on the outside as I feel on the inside.  So it was an interesting--if not ego-boosting--experience to see myself through the eyes of several artists when I sat as a model for a class at the Visual Arts Center last week. 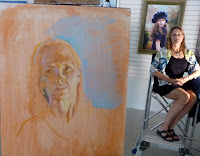 You might wonder how I ended up perched on a chair in the front of a room feeling a bit like a piece of furniture or fruit as artists peered at me from all angles.  My friend Susan takes art classes at the Visual Arts Center when she is here for the season.    A few weeks ago, Susan was asked by Margaret Egli-Thomson, her instructor, to model for a class.  Susan agreed and really enjoyed the experience.  When I asked her how it went, she told me that they were in need of additional models and wondered if I would be interested.  Why not?
The class was held in the Salon des Refuses at the Visual Arts Center.   Just a few days before, the gallery had been filled with works from the National Art Exhibit; the works on display had not been selected for that show.   The "Salon des Refuses" moniker is a reference to the exhibitions in 19th century Paris of works that had been rejected by the jury of the Paris Salon.  The most famous Salon des Refuses was in 1863 and included Manet's Dejuener sur L'Herbe (Luncheon on the Grass) and Whistler's Symphony in White:  The White Girl.  During the 1870s many Impressionists exhibited their works in the Salon des Refuses as a protest against the art establishment.  Their objective was to let the public draw their own opinions about the art rather than be dictated to by the "experts."   But back to the present day....

Not surprisingly, I felt quite self-conscious as the class got underway.  It is a strange experience to have a group of people peering at you without any interaction.  I became aware of how much I was blinking as I tried to sit still in my seat.  There was a lamp directed at the left side of my face that became quite warm as the afternoon progressed.  Margaret was very considerate, though, and gave me a break every ten minutes so that I could move around and see what was happening in the class. 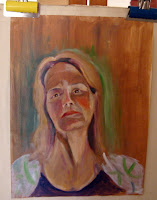 For someone who is intimidated by the mere thought of picking up a paintbrush, it was quite impressive to see these artists at work and a lot of fun to see the works progress. It was interesting to see the process behind the creation of a painting.  The class was first asked to prime their canvasses, and the students chose a variety of colors.  There was bright yellow and purple and all different shades of brown.  I neglected to ask the students what they were thinking when making their color choices (but am hoping that the people who chose darker colors weren't responding to some sort of dark vibe in me!)  The students were then told to do a bit of sketching to get a sense of where they wanted to go with their work.  Some people sketched directly onto their canvas and worked from there.  Others did pencil sketches on scrap paper and then began work on their canvas, using their paint to draw the outlines of the figure.  Margaret encouraged the students to think about the "values" of the subject--the contrasts between lights and darks (which is probably why I had a light directed at my face).    They were encouraged to step away from their canvasses periodically to get some perspective on their work.  As the afternoon progressed, Margaret  roamed around the room to help the students make adjustments to their work.

It ended up being quite a fun way to spend an afternoon (even if I did come away with a checklist of items to look for at the beauty counter and a resolve to get a hair style that doesn't show off my high forehead!)   I also came away with a greater appreciation of what goes on at the Visual Arts Center.  During the course of the afternoon, there were four painting classes and one photography class filled with students working on their craft.  (I suspect I missed a pottery class being taught since I didn't wander back to that studio.)  Some artists were collecting their works that had been on display for the National Art Show; others were stopping by to drop off works for the upcoming Student-Teacher show.  And of course the gift shop was doing a bit of business.   The Visual Arts Center is a vibrant part of our community, with something for everyone who is the least bit artistically inclined.    If you haven't done so in the past, you should definitely check it out.