The Uncalled For Christmas Tour

According to a Yiddish proverb, "What soap is to the body, laughter is to the soul." There must be some truth to this saying because my cares dissolved away last night at a hilarious evening of "storytelling" by the Uncalled for Trio. I was invited to this fundraiser for the Visual Arts Center by some friends and had absolutely no idea what to expect. I tend to be wary of comedy routines; I can hardly think of a less enjoyable way to spend an evening than being trapped in a room listening to someone who is just not funny. Trust me, though, when I say that there was no need for this concern with The Uncalled for Trio, which is made up of Bill Lepp, Kim Weitkamp and Andy Offutt Irwin. 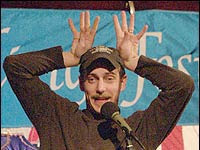 Lepp is the five time winner of the West Virginia Liar's Contest. (Not wanting to fall for a whopper, I checked it out and this contest actually is a Memorial Day tradition in Charleston, West Virginia, with Lepp being the proud possessor of five Golden Shovels.) Lepp's stories centered around his grandfather who, as an immigrant who came to America just before the Depression, never threw anything out. Of course he wanted to put his treasures to good use so one year he combined a snowmobile and a kayak into what Lepp called a motorized "Cockroach Santa" because of the antenna coming out of its head and entered it in the local Christmas parade. When the remote control was overridden by the ambient noise, "Santa" terrorized the Irish step dancing children in front of him in the parade, who to this day do not set cookies and milk out for Santa. I was literally doubled over with laughter as I listened to his tales. 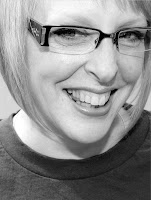 Weitkamp calls herself "the Hallmark moment between the two crazies," and this was an apt characterization. Weitkamp's stories centered around people whose laps she'd sat in as a child, ranging from the owner of the local 5 and 10 store doing his annual gig as Santa to her father who would pull her onto his lap and sing a few off-key bars from "You are My Sunshine" as a way of bridging the gap between them. While Weitkamp's stories had a good dose of humor woven into them, they primarily told of the importance of relationships. Weitkamp ended her act by pulling out a guitar and singing a beautiful version of "You are My Sunshine."

Last up was Andy Irwin who describes himself as having a "silly putty" voice. As he channelled the voice and spirit of his 85 year old Aunt Marguerite, I almost forgot that he was the one telling the stories. Aunt Marguerite is quite the character and, having gotten bored of bridge clubs and garden clubs, recently graduated with three of her friends from medical school and opened the "Southern White Ladies Hospital." The hospital is a place for many people, including those who have done something so ridiculous that they don't want to go to the regular ER to be treated. Take, for instance, Ray, one of the hospital's recent patients. Ray is an asthma sufferer who pulled his inhaler out of his pocket and took a big suck only to get a throat lozenge--wrapper still on--lodged in his esophogus. Oops!!! Aunt Marguerite tells people who make an inappropriate comment that "that was uncalled for," and I have to assume that that's the genesis for the name of this tour.

I can't tell you when I've had a more enjoyable evening (and the Visual Arts Center raised some money from the event to boot.) Going overboard on these things as I often do, I'm now contemplating going to the National Storytelling Festival next October in Tennessee. Wouldn't it be a hoot??? May you have the gift of laughter this holiday season.
at December 13, 2011