From a lay person's perspective, the most buzzed about artist at Art Basel seems to have been Amoako Boafo. (Note that I said artist, not artwork. "Comedian" wins the prize for most talked about artwork hands down.)  I had read about the artist before my adventure and was eager to see his work in person.  It did not disappoint.

Ten years ago, Boafo was living in his hometown of Accra, Ghana. Art was his passion, and he wanted to make it his profession as well. While his family didn't totally discourage him from pursuing his dream, they did point out he had to make a living. Boafo was selling some of his portraits to local hotels, but only for $100 a pop. His primary income came from working as a pallbearer. He was on the verge of discouragement when Kehinde Wiley discovered the young artist and purchased one of his works. And with that, his prospects took a turn for the better.

Of course, it didn't happen overnight. Boafo went to art school in Ghana and then, somewhat serendipitously, ended up studying in Vienna at the Academy of Fine Arts. He remembers that when he arrived, people told him he had talent but needed to paint "different characters;" i.e., white people. He actually considered taking their advice, but quickly realized he had to be true to himself. In his work, Boafo explores and celebrates black identity. His patchy paint style comes from using his fingers in lieu of a brush for portions of his portraits. To read a great interview in which the 35 year old artist talks about finger painting and the influence of Egon Schiele, click here. And if you happen to be in the Miami area, don't miss the exhibit of his work at the newly opened Rubell Museum.

Thomas Zipp's paintings also caught my eye. How could they not when portions of his work literally emerge from the canvas? Sadly, I haven't been able to discover much information about the German artist. He works in a variety of media, so the addition of three dimensional components to his painting isn't wholly surprising.

Zipp's subjects are often controversial historical figures such as Otto Hahn, the father of nuclear chemistry, and Martin Luther, the person credited with the schism with the Catholic Church. But I don't think poor Fiona falls into that category. I do know things don't look good for her, with only some pencils and a rolled up piece of paper for protection from this fish. He doesn't look too dangerous, though, despite the painting's title. I'm optimistic for her chances.

I previously mentioned the Meridians section of Art Basel, located in the ballroom of the Miami Beach Convention Center. The expansive space provided room for Alexis Smith's "Fool's Gold." The work is 22' across by 10' high. This might be one reason the painting has not been exhibited since the artist's 1991 retrospective at the Whitney. 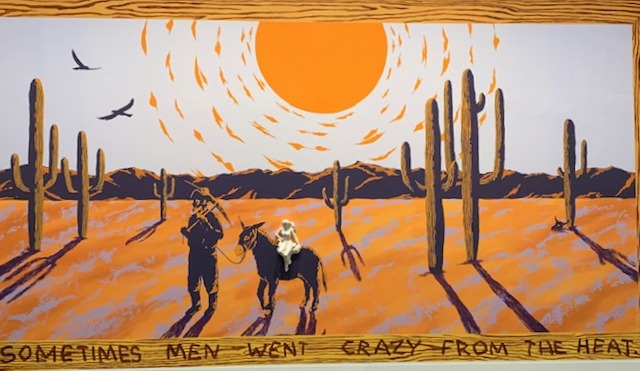 There were so many interesting things going on in this painting that I wasn't sure where to look first. Like Zipp's work, the painting included a three dimensional figure; in this case, a woman sitting atop a donkey being led by a prospector through the desert. At first glance, it seems like he's a good Samaritan type. What you can't see in this picture -- large as it is -- is that the woman is wearing what appears to be a two piece bathing suit and her "saddle" has the appearance of a coiled snake. Hmm.

Smith is known for her interest in popular fiction in general and pulp novels more specifically. The text is apparently the type of overwrought phrase you'd find in a romance novel of the era. It adds an element of danger. Would this man suddenly turn on her and attack her?  He seems much more ominous with his pick axe than Zipp's colorful fish. Then there's the heat pulsating from the sun, the skull, and what might be buzzards flying overhead.  So much to think about. I want to know the next installment of this story.

You might wonder how Claudio Parmiggiani's "Untitled" got any attention in a convention center filled to the bursting point with color and noise and flash. But you show me a bookcase, and I have to check it out. It was well worth the stop.

The variety of mediums artists use to create their work never ceases to amaze me. Parmiggiani's  "Untitled" is a perfect example; the work is comprised of shadows and imprints made with soot and smoke.

In a (very dry) lecture Neil Powell gave about Parmiggiani for the Simon Lee gallery, he talked about the artist's intention in this series. The works are a reference to book burnings by the Germans in the lead-up to the Holocaust and invoke the horrific idea of cultural cleansing. Powell suggested they might also be a reminder of the aftermath of the atomic bombs being dropped on Hiroshima and Nagasaki. There one moment there, gone the next, leaving behind only dust particles from a former life. Once again, a work with power as well as beauty. To see more of Pamiggiani's work, click here.

That was an awfully serious work, so here's something a bit more fun -- and Floridian. Hernan Bas finds his inspiration in everything from the Hardy Boys series and Oscar Wilde to fashion lay-outs to Goth. He's been incredibly successful; the Rubell Family Collection had a retrospective of his work ten years ago when he was just 29.

Bas has said of his painting, "I do like the idea that everything is contained -- the entire narrative - within the frame of the canvas. But paintings that I consider to be successful are always on the verge of falling apart. To me, that's the fun of it -- the eminent collapse, and also the challenge."

To see more of his work, click here. And if you're interested in a deeper dive, check out some of the video links. In one video he shares that photography was his initial medium. He reluctantly began to focus more on painting due to space restrictions in his studio. With an express nod to Oprah, he said he's finally "owned" the fact that he's a painter, full stop. Having said that, he moved from his native Miami to Detroit in part so he could have sufficient space for a dark room. He's definitely an artist to watch.

I'll leave you with Laurent Grasso's "Studies into the Past." The work is part of a series the artist did for the Olivier Malingue Gallery entitled "The Panoptes Project."

In case you're not up on your mythology, Argos was a hundred eyed giant. His father was called Panoptes, or all seeing one, so it was kind of a family thing. (For the record, Argos apparently used his talents for good rather than evil.)

In the exhibit, Grasso's beautiful and eerie paintings were displayed with other eye-forward art from the Gallery's collection, including works by Magritte and Picabia. The Gallery explained in its description of the exhibit, "The meaning of seeing is investigated throughout different centuries following the antique beliefs that the eye is a source of light as well as the Surrealist approach to vision as a spirituality.,, The spectator feels an uncanny presence that is lyrical and disturbing at once."  It sounds a bit creepy and Big Brother-ish to me, but I'm all in on "Studies into the Past" on a stand-alone basis. To see more from the exhibit, click here. Now I'm off to find my Turkish evil eye.

Next up: Art with Text and Light