Summer in Florida is the perfect time to pick up a good book, whether you're spending time at the beach or hunkering down with the A/C on full blast.  Read on for a peek into what I've been reading while I hide out from the heat and humidity. 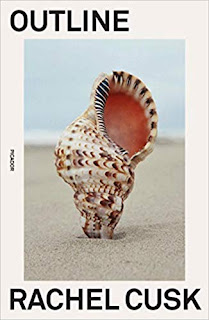 "Outline" by Rachel Cusk -- I know, I know.  I'm extremely late to the Rachel Cusk party. But better late than never.

I finally picked up "Outline" after listening to a terrific interview with Cusk on the Aloud @ Los Angeles Public Library podcast. (Thanks, Libbie!)  I will admit to having been a bit intimidated by her "plotless" books. But while there's no plot in the traditional sense, the book is not abstract as I had feared. "Outline" follows a writer through ten conversations that take place during her trip to Greece to teach a creative writing seminar.

Cusk's writing is, quite simply, stunning. You could likely open to any page and find a passage that would make you sit back in appreciation. But of course I'll share a couple of my favorites. Here's her description of Paniotis, a friend whom our protagonist meets for dinner.

"....There is something of the cartoon character about Piniotis' face: everything about it is exaggerated, the cheeks very gaunt, the forehead very high, the eyebrows winging off like exclamation marks, the hair flying out in all directions, so that one has the curious feeling one is looking at an illustration of Paniotis rather than Paniotis himself. Even when he is relaxed he wears the expression of someone who has just been told something extraordinary, or who has opened a door and been very surprised by what he has found behind it."

After setting the scene so precisely, it should come as no surprise there's not much chit chat in these characters' conversations. Cusk's pages are filled with self-aware people who are not the least bit reluctant to share their inner thoughts and feelings with friends and strangers alike. I found myself thinking on more than one occasion how emotionally exhausting it would be to spend time with these people. Being a fly on the wall, however, was extremely satisfying. This excerpt -- from a conversation with a playwright suffering from writers' block -- is an example.

"I asked her what the problem was.

'I call it summing up,' she said with a cheerful squawk. Whenever she conceived of a new piece of work, before she got very far she would find herself summing it up. Often it only took one word: tension, for instance, or mother-in-law, though strictly speaking that was three. As soon as something was summed up, it was to all intents and purposes dead, a sitting duck, and she could go no further with it. Why go to the trouble to write a great long play about jealousy when jealousy just about summed it up? And it wasn't only her own work -- she found herself doing it to other peoples, and had discovered that even the masters, the works she had always revered, allowed themselves by and large to be summed up. Even Beckett, her god, had been destroyed by meaninglessness....'"

If these passages don't grab you, Rachel Cusk is not for you. But if you found yourself savoring her words, "Outline" will bring you hours of reading pleasure. 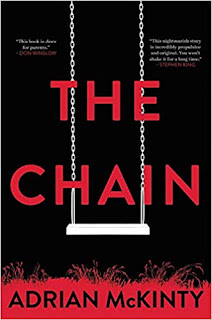 "The Chain" by Adrian McKinty -- "The Chain" is not a literary masterpiece. But sometimes a thriller you don't want to put down is just the ticket. "The Chain" is that kind of book.

The set up is a scheme only a true sociopath could devise. Imagine this. Your phone rings with an unknown number lighting up the screen. When you answer, you get news that changes your world forever -- your child has been kidnapped. The only way to get her back is to pay the ransom AND to kidnap another family's child. If you contact anyone your tormenters haven't approved, your child will be executed by her poor abductors, who then will have to go through the process of kidnapping another child. In a flash, you have become a victim plotting your own crime.

I blazed through McKinty's novel, the first "American" story penned by this Irish writer. As of the end of May, the rights had been sold in 31 countries. Praise has come from thriller writers galore, including Stephen King ("incredibly propulsive and original"), Dennis Lehane ("diabolical and unnerving") and Attica Locke ("a grade-A, first-rate, edge-of-your-seat thriller"). If thrillers are your thing, you won't want to miss "The Chain."