On Saturday afternoon, book lovers braved the weather to attend the National Book Foundation event at Selby Library. On hand were poet Diana Khoi Nguyen and novelist Margaret Wilkerson Sexton.  I expected the afternoon to be interesting, and it was. What I didn't expect was an emotional experience.

Nguyen began writing what became "Ghost Of" as a way to deal with her grief. Her younger brother Oliver committed suicide in 2016 at the age of 24.  Nguyen shared this personal and painful background before she began to read. Due to a difficulty with her mic, she had to repeat herself three times. 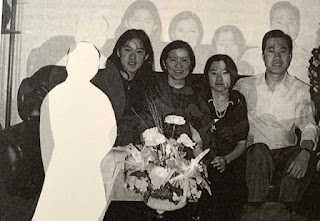 "That's weird to have to say this [multiple times]," she said, almost to herself. "But that's how grief works."  She later admitted she has to steel herself each time she makes an appearance to talk about the book.

It can't be said that there was no warning. Two years before his death, Oliver went through the family photos hanging in their parents' house, where he still lived, and cut himself out of every picture. Although they noticed, her parents never talked to Oliver about why he had graphically expunged his existence within the family. Nor did they take the pictures off the walls. 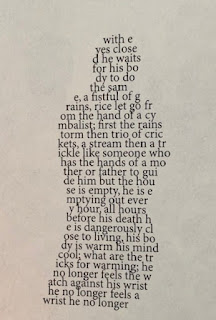 By way of explanation, Nguyen told the audience her parents are immigrants who escaped from Saigon during the war. They are not people who discuss mental health issues, which are considered shameful in their culture. Nor do they talk about the trauma they experienced in Vietnam or during their journey to the United States. Growing up, Nguyen's parents would just tell her they "took a boat" to get here.

"There is silence around where they came from and what they've endured," Nguyen said. There has also been silence about her mother's abuse of Nguyen and her siblings when they were young. This led Nguyen and her mother becoming estranged for a period of time.

On a visit home following her brother's death, Nguyen realized she wanted to use the photos to write poetry about her brother and their family. She considered the keyhole space a way to reach towards the person who was no longer there. For some reason, these keyholes helped her unlock the ability to enter into her grief.  Over time, Nguyen created what she calls her triptychs. They are comprised of a photo, a poem written within the cutout figure of her brother, and a poem written as a "frame" around the cutout. 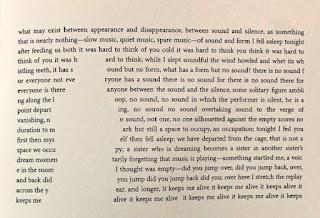 Nguyen read one of her Triptychs (shown here in these three images) for the audience. Throughout these poems, words break in the place dictated by the space. The print is very small, so she kept track of her place on the page by following along with her finger. When she came to a word broken up by the keyhole, she paused mid-word in acknowledgement. The effect was both powerful and heartbreaking in its emphasis on what was absent.

While many poems in the collection were written in response to Oliver's death, others draw on the Nguyen's family history. "The Exodus -- Saigon to Los Angeles 1975-2015" references both. It's difficult to choose only a few lines to share.  But the final third (which appears in the book opposite the family picture above) will give you a sense of her work:

Before my brother was born, all four of us
slept beside one another in one bed.
In an effort to resist memory,
my mother asked me to shake her awake

The night before the monks came
to usher my brother out of the realm of the living,
we gathered on the same bed, sifting through photos
and stories of him.
At the funeral, his hand was warm
where my mother would not let go

Maybe you'd forget
why you were here, that you
didn't belong
that just because it was like life,
didn't mean it could be life,
that you could come back to life
but not return to living.
And if you bypassed a war, a war
wouldn't bypass you." 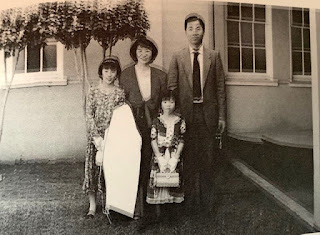 Although Nguyen wrote the poems that became "Ghost Of" as a way to process her grief, she realized the collection could become a book. She waited to tell her family about its publication until shortly before the release date. She didn't want their reaction to cause her to reconsider her decision to share this most personal work. Her parents didn't understand why anyone would care about their story.

The book's publication has enabled Nguyen and her family to begin to talk about Oliver's suicide. Previously, her mother would refer to his death by using a Vietnamese word that literally translates into "I lost my sock." "He's not a sock," Nguyen would say in response.

"Ghost Of" was a finalist for the 2018 National Book Award for Poetry. I feel honored to have had the opportunity to hear Nyugen's story. Click here to learn more about Nguyen and to see more of her work.