It seemed only fitting for our ladies' law school group to take in the Votes for Women: A Portrait of Persistence exhibit at the National Portrait Gallery during our gathering in DC. It was illuminating -- and humbling -- to learn more about the 88 year movement to secure the right to vote for women.

But first, a quick Constitutional primer.  (Don't take offense. I did this for myself.)  The first clause of the 14th Amendment --  the equal protection clause -- ensures equal rights for all "citizens." Sounds good, right? But the second clause of the Amendment makes it clear that women are excluded from its scope. After all, those of the fairer sex were considered a mere appendage to their husbands -- or, if unmarried, their fathers. The natural consequence of this paternalism was to prohibit women from exercising all sorts of rights given to men, including the right to vote.

Of particular interest to us lawyers was the 1869 case in which Myra Bradwell, a law school graduate who had passed the Illinois bar, was denied the right to practice law. In making its decision, the Illinois Supreme Court called Bradwell, and all other women, legally "disabled." On appeal, the U.S. Supreme Court upheld the decision. One justice wrote, "The paramount destiny and mission of women are to fulfill the noble and benign offices of wife and mother." (Note: This little slice of history wasn't in the exhibit, but it seems too appropriate not to share.)

We were surprised to learn that, despite not having suffrage, a woman ran for President as early as 1872.  Victoria Woodhull was nominated for the office by the Equal Rights Party that year, with Frederick Douglass as her Vice President  Although Woodhull's support of "free love" for all was not an official part of her platform, it didn't help her campaign. (For the record, her advocacy arose from the double standard in the treatment of men and women who had extramarital affairs. Case in point: Henry Ward Beecher who, according to Wikipedia, is known for "his support of the abolition of slavery, his emphasis on God's love, and his adultery trial." Click here to read more. And yes, Harriet Beecher Stowe was his sister.)

Setting aside her gender, Belva Ann Lockwood was a more traditional candidate for the Presidency in 1884 and 1888. Like Woodhull, she was nominated by the Equal Rights Party. But Lockwood had a bit more stature than Woodhull, having successfully argued for Cherokee land rights before the Supreme Court in 1880. (Obviously, the judicial system had made some progress in the 1870s on the issue of female lawyers.)  Why aren't these women an integral part of American history?

Fast forward to March 3, 1913, when women were still fighting for the right to vote. Between 5,000 and 8,000 women descended upon our nation's capital to march in favor of women's suffrage. Alice Paul and Lucy Burns were the masterminds behind the march, which they knew would draw media attention. The date was selected to coincide with Woodrow Wilson's inauguration the next day. Not only would media be in town for the event, but police protection would presumably be readily available. Police Chief Richard Sylvester was not, however, a supporter of the cause, and he made it clear his officers were not to be counted on. In response, Secretary of War Henry Stimson stationed members of the Army Cavalry--the equivalent of today's National Guard--in an easily reached Virginia town. When the mostly male crowd started getting a bit rough with the protesters, the Cavalry was called in to enforce order.

I am ashamed to say the logistics seemed too daunting for me to make it to DC for the 2016 women's march. Not so for "General" Rosalie Jones and her Ambassadors of Justice. These passionate women walked from New York to DC to participate in the 1913 protest. It took them 16 days to cover the 200+ miles. They took the opportunity to bring their message to people living in the small towns they traversed along the way. "The people in the small towns don't see suffrage literature," Jones commented in an interview. "We had to bring them the message in person."

Theater lover that I am, I smiled when I learned the Woman Suffrage Procession -- as the march was officially called -- had a theatrical element.  In this image, actress Hedwig Reicher portrays Columbia, an allegorical figure who personifies the United States. (Who knew?)  Columbia is sporting a Phyrgian cap, a style of headwear that had come to signify freedom and personal liberty since the French Revolution. From her vantage point in front of the Department of Treasury, Columbia reviewed the marchers -- military style -- and endorsed their cause. Other theatrical elements of the march included a procession-pageant of Liberty and her Attendants. 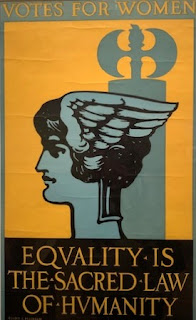 The exhibit was moving and inspirational. At dinner that night, Linda suggested our group get together with more frequency and that we infuse our next reunion with a bit of activism. We've penciled in an October 2020 gathering in one of the Mid-Western swing states to provide support for whomever the Democratic might be.

A huge thanks to Althea for spearheading our reunion. I feel so fortunate to have these smart, strong, funny and caring women in my life (for more years than I like to acknowledge!) Like the suffragettes, they are an inspiration to me.

The Votes for Women exhibit runs at the National Portrait Gallery through January 5. 2020  Don't miss it if you're in the area. (As a bonus, you can see the Obama portraits by Kehinde Wiley and Amy Sherald. They are fabulous.) For more great photos from the Woman Suffrage Procession and other early suffrage marches, compliments of The Atlantic, click here.