Visiting an artist's studio is always a treat. So when Wendi asked if I wanted to join her on an outing to two artists' spaces, I jumped at the opportunity. The tour was led by John Zinsser, an artist himself who teaches an art appreciation course at the New School that Wendi has taken for many years. (Exhibits on display in galleries and museums serve as the curriculum for the course, which I've sat in on in the past. The class is beyond fascinating -- and beyond the scope of this post.)

All of this is a slightly long-winded way of explaining how I found myself in Sharon Butler's studio in the DUMBO area of Brooklyn on a gloomy Tuesday afternoon. Competing with the sounds of the elevated trains going by her window, Zinsser introduced Butler by reference to her acclaimed blogazine Two Coats of Paint. He noted that conversations about art and culture that would have taken place in a salon in the era of Gertrude Stein happen today online through blogs like the one published by Butler. And with that, we were off. 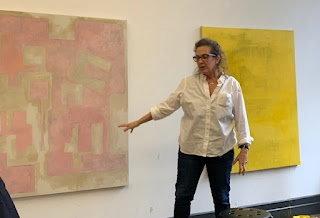 If one were to categorize Butler's work, it would be called geometric abstraction. Think Josef Albers and Piet Mondrian. But Butler uses a tool to create her work that her predecessors could never have envisioned -- her iPhone.

Every morning, one of Butler's first tasks is to create a drawing on her iPhone. Her app of choice -- Pixart -- uses only geometric shapes, so she is always working within those confines. To Butler, each shape has a personal meaning. (She kept those meanings to herself.) Once completed, she posts each drawing on her Instagram feed. 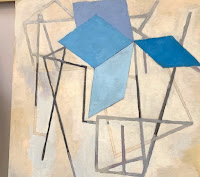 These drawings serve as the basis for her series of works. For her "Good Morning" series, she selected drawings made on dates with personal meaning to her. Butler generously shared that one painting was created from a drawing made on the day her daughter OD'd on heroin. Butler didn't know she was using. Interestingly, the drawing was full of hard lines and jagged edges that give the viewer a sense of unease. (Note: Butler's daughter is doing fine.)

Another series is based on drawings that were the most "liked" on Instagram. (She has no idea why some drawings garner more "likes" than others, but she suspects it has to do with their colors. Curiously, once she told people the basis for the series, the overall number of "likes" of her posts declined.) Butler considers the series an exploration of the notion of popularity which, in turn, made her consider the distinction between the electoral college and the popular vote. Her current series is developed from her drawings on significant dates relating to the Mueller Report.

In all cases, her paintings are titled merely by date. Butler believes not defining the work further allows for a greater dialogue between the viewer and the artist. Ultimately, Butler said, she is interested is how we live each day not knowing how it will come out.

Butler shared her process with the group as well. Once she's decided a drawing will be the basis for a painting, she creates small sketches (like the one shown in this photo) in which she plays a bit with the image. When she's satisfied that it communicates her intention, she projects the drawing onto a canvas and recreates it free hand. The goal is to make the digital image more painterly. Her choice of color is consistent with the choice made when she created the drawing. 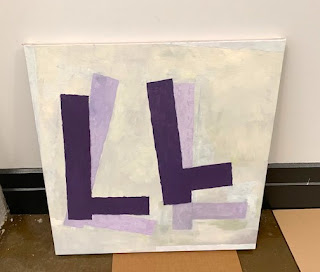 I enjoyed listening to Zinsser's academic discussion of Butler's work that included references to artists with whom I am not familiar. He viewed the painting with black diamonds as figurative and the pink painting next to it as barbed wire-ish. (Perhaps a reference to issues about incarceration?) He opined that a larger scale assigns more significance to a work. Moving from phone to paper to canvas makes the work somehow more important and, in turn, makes us want to feel like it's "of" something.

While Butler acknowledged Zinsser's points, she resisted any attempt to assign a specific meaning to her paintings. Her work is intended to be experiential, with the viewer creating its meaning based on her own history and emotions. (Having said that, I defy you to think of anything other than "these boots are made for walking" when looking at this purple painting.)

Needless to say (and yet I will), I loved meeting Butler and being introduced to her work. My head was abuzz from the discussion, and our day was not over yet.