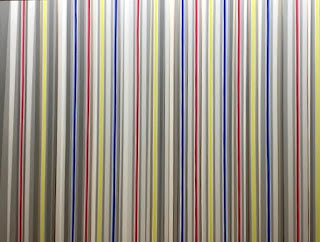 It was a short walk from Sharon Butler's studio to Gabriele Evertz' creative space. The stroll served as a palate cleanser between two enjoyable -- yet quite disparate -- parts of this artistic meal.

Evertz came to the United States from Germany at the age of 19 full of "curiosity and idealism." Her background includes training as an architect, and she brings this rigor to her art.

Evertz works in the tradition of color abstraction. As an article by Joe Houston about Evertz explains, color abstraction originated with the Bauhaus in the 1920s and came to fruition internationally with the Op Art movement of the 1960s. But it is the work of Barnett Newman that has perhaps had the strongest impact on Evertz. After seeing Newman's "Vir Heroicus Sublimus" for the first time, her reaction was so intense that she practiced fainting before her next viewing. 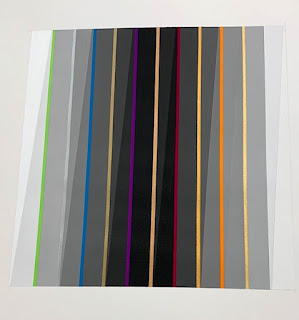 Evertz spoke about different interpretations of the world "sublime" as it relates to art. The adjective is frequently used with reference to the beauty of nature found in the Hudson Valley or the expansiveness of the West found in the West. Think Albert Bierstadt, Frederick Church or Jackson Pollock (who was born in Wyoming). To Newman -- and Evertz -- the sublime is more a philosophy than something physical. It's anything awe inspiring. It's the reaction Evertz had when seeing Newman's "Vir Heroicus Sublimus." The distinction is thought-provoking.

While Evertz is passionate about color, she doesn't employ it indiscriminately. She always works from a place of logic. Her color wheel is prominently displayed in her studio, and she refers to it often. She made the wheel herself with colors directly out of the tube to ensure their greatest intensity.

Evertz' earlier work is so vibrant it nearly pulses off the canvas. For ten years she used all 12 colors in every one of her paintings. She said she "couldn't bear to leave one out." While she now allows herself some editing, she has consistently employed stripes as her means of compelling the viewer to consider the juxtaposition of color.

Like Butler, Evertz considers the viewer an integral part of each painting. She titles her work as a way to direct the viewer. (Sadly, I didn't get the titles of all the works here, but I believe the first image is named "Exultation.")

Zinsser noted people tend to remember paintings with names better than "Untitled" or, better yet, "Untitled #5."  He compared creating a painting to bringing a child into the world. Who lets their child proceed through life nameless?

But this creates a dilemma for abstract artists. It's beneficial to provide viewers a "mode of entry" into the work, but titles inevitably tap into the viewers' own associations outside of the visual experience.

Case in point: Evertz' Icarus series. Following the shooting in Parkland during which 17 students were killed, Evertz turned to her art as a way of expressing her feelings about the tragedy.

Evertz used only black and white in the early "Icarus" works. She began introducing color in the 15th painting of the series. The 38th and final work was a return to her vibrant work as she celebrated the young people turned activists as heroes. The progression was a powerful reminder of the resilience of the human spirit.

As I looked at this portfolio, I saw what Evertz was describing. But I do wonder what I would have seen if Evertz had not provided the context for this series. And I have to acknowledge that my interest level skyrocketed when I learned she created these works in response to the Parkland shootings. (For those who don't know, my sister and her family live in Parkland and know many kids who attend Stoneman Douglas. Coincidentally, I was wearing my Stoneman Douglas "Make Art Not War" shirt on my visit to Evertz' studio. The graphic on the front of the shirt includes a rainbow of colors that received a thumbs up from Evertz.)  For others in the room without a Parkland connection, the series likely had a much lesser impact.

All too soon, our time with Evertz ended. It had been an incredibly stimulating afternoon, both visually and mentally. A huge thanks to Wendi -- and to John Zinsser -- for letting me tag along.