"The Museum of Modern Love" by Heather Rose 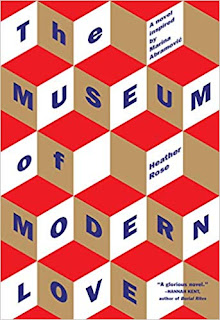 Performance art is confusing. I haven't had the opportunity to see a lot of this genre of art, but what I have seen has generally left me baffled and/or wanting to call bulls**t.  And yet I'm kind of fascinated by it.

Enter Marina Abramavic, one of the few performance artists whose name is fairly well-known. This is in large part due to her work "The Artist is Present" which took place at the Museum of Modern Art from March 14-May 31, 2010. For seven hours a day, Abramavic sat across from people who had queued up for the opportunity to gaze into her eyes. The silent and still contemplation of another human being was the performance. Over the course of the show, Abramavic sat for 1,545 sitters over a total of 736 hours. (One of those sitters was my friend Wendi.)

The show, which was part of an Abramavic retrospective at MOMA, is the subject of a documentary and a non-fiction book. It also provides the basis for "The Museum of Modern Love" by Heather Rose. I loved it.

The nominal protagonist of the novel is Arky Levin, a film score composer who has suffered a great loss. Although he's working on a project, he's essentially housebound until a friend encourages him to check out "The Artist is Present." Levin does and is entirely drawn in, returning day after day to watch Abramavic and her companions.

It doesn't sound much of a plot. But the action is not of the car chase variety. It's all internal, as Arky and other characters experience personal revelations with the help of Abramavic's art. Some of the characters--like Arky--are mere observers; others become participants in Abramavic's work as sitters.  It's worth noting that although Rose envisions the reaction her characters have to "The Artist is Present," she did so after much research. The book is endorsed by Abramavic herself.

There are so many post-its protruding from my copy of the book that it's difficult to know what to share. But here are a couple of the passages that struck me and will give you a sense of the novel. 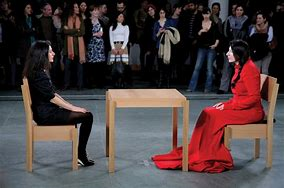 During Arky's first outing to "The Artist is Present," he watched as a young woman yielded her chair across from Abramavic to an older man. "When the man finally left the chair," Rose writes, "Levin watched him walk to the back of the atrium and lean his forehead against the wall. Levin wanted to go the man and ask what had happened as he sat. How had it felt? But to do so, he realized, would be like asking a stranger what he prayed for."

About Jane, a visitor to New York who recently lost her husband (and who ended up spending her entire vacation on the sidelines watching Abramavic and her sitters). "Jane wondered how many times she had looked into Karl's eyes for more than a few seconds. In twenty-eight years of married life, what was the sum total of eye contact they had ever made? What might they have seen in each other, if they'd really looked?"

And from Keeble, a high profile art critic.  "She was mute, and yet everything about her was loud." 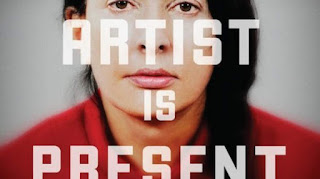 This is a book that made me think about my own human connections while realizing, once again, the power of art to make us feel. I also learned a lot about Abramavic. Rose highlights for readers the pain Abramavic suffered while sitting still day after day. This wasn't intuitive to me, but once it was pointed out, I realized how amazingly difficult it would be.

Rose also spends some time on the MOMA retrospective of which "The Artist is Present" was a part. Her body of work is intense, requires immense endurance and includes physical risk. She is a woman fully committed to her art. (To read about her work, click here. Don't miss the description of her walk of the Great Wall of China with her then partner Ulay. https://en.wikipedia.org/wiki/Marina_Abramović )

If you're the slightest bit intrigued by this post, I urge you to check out "The Museum of Modern Love." It's unique and thought-provoking. And while I'm not a book club person, it would be a terrific book for a group of friends to discuss.