Hurricanes are a fact of life if you live in Florida. Growing up in Panama City, I remember numerous threats. Sometimes we would join a caravan of cars and evacuate north. Sometimes we would evacuate to a safer nearby location. Most often we would just hunker down. Without fail, the hurricane would veer off in another direction or, at worst, come through as a tropical storm. Not so with Hurricane Michael.

In early October, we began tracking Michael, a storm that was growing into a Category 5 threat to the Panhandle. It showed no signs of weakening or changing directions.  Panama City was in its sights.

My parents, who now live at Mathison Retirement Community, received a call at 9 p.m. on October 9th. They were told to pack a small bag with three days worth of provisions. They were going on a road trip. (If the theme song to "Gilligan's Island" is running through your head, you're not alone.)

Mom and Dad dutifully packed up and, with the rest of the Mathison residents, boarded a bus the next morning. By the time Michael roared through at full force, they were safely in Montgomery.

And so began their vagabond adventure of the last five and a half months.

Mathison's management has been incredible throughout this time. From the first moment, they were fully on top of the situation as they made contingency plans for their residents. They stopped in Montgomery because a sister facility could bring three meals a day into the hotel for the refugees. Once it was determined that Mathison would not be habitable for some period of time, they made arrangements for the residents to live in one of their facilities for as long as necessary.  My parents landed in Birmingham, where they were taken care of for a week until I made it there for their retrieval. The good-byes to new friends and old were heartfelt and touching.

Our road trip took us from Birmingham to my sister's in Parkland via a short stop in Panama City to collect more clothes. The town was unrecognizable, with buildings flattened or sporting blue tarps, trees down everywhere, and debris of all sorts wherever you looked. The devastation was mind-boggling.

Our arrival in Parkland was a relief to everyone. My parents settled in for a stay of several months. They were given an important job -- taking care of Jakie while my sister transitioned to a full-time job. Timing is everything.
﻿﻿
I got my time with them as well, as they moved to Sarasota in late February when my sister and family took a much-deserved vacation. (Jakie visited as well for the first ten days.  It was a bit chaotic.)

I would be less than truthful if I said this time has been easy. It hasn't. Living together again after decades of being independent required lots of flexibility and respect. Some days were better than others. And then there were the day-to-day issues of seniors. New doctors had to be found to treat my parents' various ailments. There were four trips to the ER -- a pair for each -- and a couple of near death experiences for my dad. I finally have a real appreciation of the difficulty of my parents' daily life. 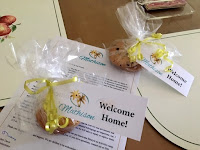 But the time has brought much joy to our family as well. We celebrated Thanksgiving and Christmas together, as well as my parents' 60th wedding anniversary. (Actually, it was their 61st, but that's another story.)  Mom's birthday received more attention than the typical phone call and package in the mail. And my parents were able to learn more about our day-to-day lives as well, be it my sister's crazy work schedule, Drew's debate prowess or my obsessive theater going. And I had the experience of going for a pedicure with my father, his first in 88 years. He drew the line at having his toes painted purple.

Most importantly, our family had this time together. It was a gift. And I'm so proud of my parents for the strength they showed throughout this time of upheaval.

Mom and Dad are now resettled at Mathison, which has been freshly roofed, carpeted and painted. The welcome back they received from the staff left no question that they are in good hands. Now the transition back to independence begins again for us all.