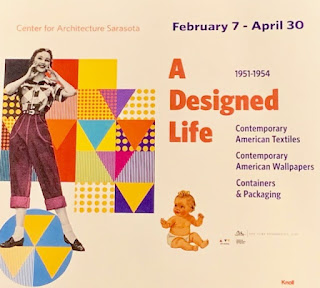 It's no shocker to hear that much propagandizing occurred during the Cold War. It might, however, surprise you to learn that one component of the United States' propaganda campaign featured traveling exhibits of textiles, wallpapers and containers/packaging, The objective: to show Communists "an attractive portrait of contemporary America." Implicit in these exhibits was the message that Americans had both the personal freedom to choose how to design all aspects of their lives and the disposable income to purchase whatever their hearts desired to realize their dreams.

The Department of State was tasked with organizing the program. "A Designed Life" at the Center for Architecture Sarasota gives viewers the chance to get a sense of how American life was portrayed.

The Contemporary American Textiles exhibit was curated by Florence Knoll. Knoll is credited with revolutionizing American furniture and textile design, especially for offices. (Think "Mad Men.")  She worked and studied with modernists like Walter Gropius and Mies van der Rohe. On a more mundane level, Knoll came up with the idea of putting fabrics on a metal ring so they'd be easier to flip through. Anyone who's shopped for furniture knows how handy that is.

For her traveling exhibit, Knoll brought together an assortment of textiles that combined "beauty and utility." She introduced viewers to textiles in an array of colors that were manufactured using processes from commercial looms to silk screening. Like everything in the exhibits, the textiles were made in the good old U.S. of A.


The Contemporary American Wallpapers exhibit was curated by Tom Lee, a designer who has disappeared into history without leaving a trace. But the story behind his exhibit is particularly interesting.

When the sample wallpapers arrived in Germany, they landed in the hands of Herwin Schaefer, a German-born State Department official charged with placing the exhibit across the country. Schaefer was concerned about the appropriateness of many of Lee's selections and winnowed the 60 wallpapers intended for the exhibit down to 40. He is quoted as having said that many of the wallpapers were "not fit for German consumption." 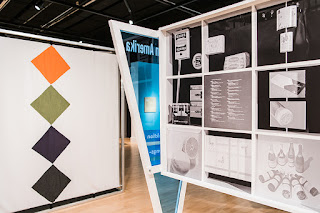 The Containers and Packaging exhibit was curated by Will Burtin, a German-born graphic designer who had fled the Nazis. Burtin included information in the exhibit about the distances between U.S. cities as a way of explaining the importance of lightweight yet sturdy containers to minimizing transportation costs. There's no record of how visitors reacted to these revolutionary packaging designs. We do know, though, that the containers on display that held food products kept mysteriously disappearing.

It would be interesting to know what the American people thought about the way their lives were being portrayed. But no such information exists due to a provision in the 1948 Smith-Mundt Act that prevented the exhibits from being displayed in the United States. The reason? It was deemed inappropriate to propagandize to U.S. citizens.

"A Designed Life" also features posters from the Intra-European Cooperation for a Better Standard of Living Poster Contest from 1950. The contest fell under the auspices of the Marshall Plan.

Artists from the countries participating in the Marshall Plan were invited to submit posters representing the theme of cooperation and economic recovery. More than 10,000 submissions were received. The winning poster was Dutch artist Roy Dirksen's "All Our Colors to the Mast." What better way to depict the cooperation among these countries than a sail made up of flags of each nation?  Click here to see images of the 25 winning posters from the contest.

"A Designed Life" came to the Center for Architecture Sarasota from University of Maryland, Baltimore County. It was curated by Margaret Re. To read more about the genesis of the exhibit  -- and to see more images -- click here.  The show runs through April 30.
at April 26, 2019