I fell in love with Karen LaMonte's work the moment I laid eyes on her Rose Gown at the Ringling Museum's Kotler-Coville Glass Pavilion. The diaphanous art glass dress is stunningly beautiful, and although the wearer is absent, there are shadows of her figure that leave no doubt that she is as alluring as her gown. I craved seeing more of her work. Enter Imagine Museum and its exhibit of LaMonte's "Floating World." It is glorious.

LaMonte's Kimono Series is the culmination of eight years of work. The project began with a seven month fellowship in Kyota studying all aspects of kimono production. As her work moved from the conceptual to the physical, LaMonte spent two residencies at the European Ceramics Work Center in the Netherlands developing new technology to create fabric texture and stitching in her work.

In many exhibits, the curator interprets and artist's work for the viewer. But for "Floating World," viewers have the chance to hear directly from LaMonte through wall cards and a video. One wall card contains this explanation about what drew  to LaMonte create this series of work:

"In all cultures, clothing is an unspoken language, but the kimono is the most codified. Every aspect of its design -- including imagery, sleeve length and obi type and tie -- is highly significant, communicating volumes about the wearer.

In place of the West's preconception with the self, the Japanese idea of beauty and its relationship to individuality, the body and nudity highlights group-centered conformity.....In eliminating the defining curves of the female body, making it uniform and neutral, the kimono literally erases the self and individuality, transcending the corporeal beauty of the wearer. By putting on the kimono, one is assuming one's appropriate place in society: its language announces and reproduces that social role."

Like most Westerners, LaMonte struggled to relate to the concept of eschewing individuality in favor of society. In the course of her extensive research, she learned about the Buddhist/Zen concept of Mu, an ideal embraced by the Japanese. It is typically interpreted to mean "nothing" or, to LaMonte, emptiness.

LaMonte shares her eventual interpretation of the concept.

"Mu is not a variant of the Western conception of nothingness or non-being. Rather it is an emptiness that contains all, the realm of enlightenment. Mu is the emptiness of the sky, which contains the universe.

Non-individualism is not non-existence; it is embedded in existence."

Given the non-individualist nature of the project, LaMonte decided against using live models for the creation of her casts. Instead, she used the measurements of a 50th percentile 40 year old  Japanese woman in the year 2000. LaMonte considers these measurements both every woman and no woman. 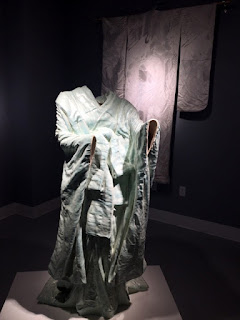 LaMonte also deviated from her norm by working with materials other than glass for this project. These materials were chosen specifically for their conceptual meanings:

I am embarrassed to say that I was so taken with the sculptures that I didn't pay sufficient attention to the gorgeous silk kimonos on display.  The good news is that the exhibit will run through the end of the year, so there's plenty of time for a repeat visit.

To watch a short video in which LaMonte discusses the project, click here. (It is six minutes well-spent.) For more images of the Kimono Series and LaMonte's other work, click here.  And for information on Imagine Museum, click here.  Trust me when I say that this is one exhibit you don't want to miss.