Who wouldn't like to take a whirl on the set of a professional theater production?  I recently had the chance to do just that -- almost literally, as we watched the set for Asolo Rep's upcoming production of "Noises Off" revolve mere inches before us. But I'm getting ahead of myself.

Ten years ago, Asolo Rep had the opportunity to purchase the nearly 37,000 square foot building that is now the Robert and Beverly Koski Production Center. Vic Meyrich, Production Manager and Head of Operations since 1969, said it was a dream come true. Renting a scenic design shop for the theater on a month-to-month basis was nerve wracking to say the least. But, as always, it came down to money. 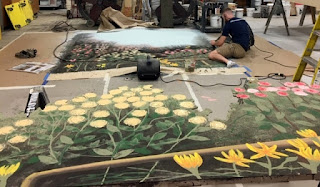 The building was in foreclosure at a listing price of $2.4 million. Thanks to some expert negotiation, the purchase price was reduced to $1.6 million -- with the caveat that the transaction be closed by year end, a mere ten days away. Asolo Rep conjured up the "big magic of the community" and got the deal done. Today, the state of the art facility builds sets for Asolo Rep and for other arts organizations, including the Sarasota Opera, the Straz and Universal. 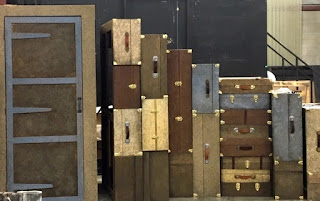 Our first stop on the tour was the props department. (Why I've never figured out that "props" is short for "properties" is beyond me.)  The Asolo boasts 8,000 square feet of storage space for the props that have been accumulated over the last 60 years. To find what you're looking for in the double decker area seems more than a little daunting. But despite the lack of a precise inventory system, it somehow works out.

You might expect that in a space that size, the theater would have pretty much every prop it needs for a production. Nope. Each show has unique needs for props to be located, purchased, made or borrowed. These suitcases, for instance, were made by the carpentry department for the summer production of "Around the World in 80 Days." The barber chair for "Sweeney Todd" will come from a previous production of the show at Theatre Latte Da, director Peter Rothstein's home base.

While the entire tour was fascinating, the star was the set for "Noises Off." The show is a play-within-a-play about a less than finely tune acting troupe putting on a sex farce. As expected, there are lots of moving parts, complete with many entrances and exits through slamming doors. The trick to the play, though, is that the audience also sees what's happening backstage.

In a typical production, scenic designers only have to worry about one side of the set. Here, both sides of the "theater" will be on view for the audience. Our guide David Ferguson, who serves as the Theatre's Technical Director when not giving tours, noted this essentially converts the set into a sculpture. The set sits on a 26' revolve, and we got a preview of how smoothly it operates.

The repertory nature of Asolo Rep makes this already complicated set even more complex. With minor exceptions, each performance of "Noises Off" will be preceded or followed by another show on the same day. As a result, there will be many set changeovers during the course of the show's run.

"Will the set fit into the allocated backstage space?" one savvy theatergoer asked. "We don't know yet," Ferguson responded with a laugh. But he assured us this contingency had been planned for by the team. A portion of the floor of the set can be taken up if need be.

The rehearsal process is also a bit more complicated than usual for "Noises Off." For most shows, the actors rehearse in the studio adjacent to the production area. But the set is such an integral part of "Noises Off" that rehearsals in the faux theater are required. I'm not sure how they're handling the noise factor; it was difficult to hear some of Ferguson's explanations with drills and power saws at work all around us. But I'm confident they've figured out a work-around.

And speaking of rehearsals, fundraising is ongoing for a new state of the art rehearsal complex. One challenge of the current space is the ceiling height. Take, for instance, rehearsals for "Evita." Ana Isabelle/Eva climbing those amazing stairs to sing "Don't Cry for Me, Argentina" was an incredible moment in the show. Not so much during rehearsals, though, when Ana had to crouch at the top of the stairs and belt out the number.

As always, getting a peek behind the scenes at what's involved in bringing a show from the page to the stage was great fun. "Noises Off" will run from March 22 through April 20. You can purchase tickets by clicking here.  I can't wait.