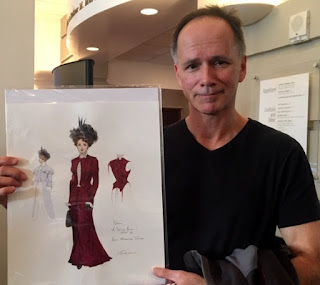 When Robert Perdziola was a child, he loved playing with dolls. He'd often draw clothing for them and sometimes even made their outfits. This pastime was not well-received in the blue collar neighborhood of Pittsburgh in which he was raised.

Perdziola was welcomed, though, into Carnegie Mellon's Drama Department. (The Fine Arts Department appreciated his talent, but suggested he get in touch with reality when he showed them his portfolio with drawings of Liza Minelli and Barbra Streisand.) He had found a home -- and a place where his talent was nurtured and grew. His resume includes costume and set designs for the Metropolitan Opera, the American Ballet Theatre, and the Stratford Shakespeare Festival.

Perdziola's resume also includes multiple stints at Asolo Rep, where he designed "Living for Love" and "Rhinoceros." His designs appear this season in "A Doll's House, Part 2." Perdziola recently spoke at a Designer Brunch at the theater, and I was front and center.

Perdziola was quite frank that what appealed to him about designing the show was the complicated issues of marriage it raises rather than the costume design opportunity. After all, the show has only four characters and no costume changes. (By way of contrast, "The Music Man," Asolo Rep's season opener, required more than 80 costumes for its large cast.) 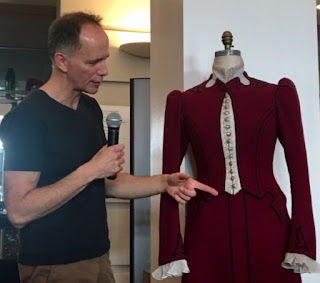 The show takes place in the 1890s. Nora has just returned home after a 15 year absence from her home and family. She is a successful writer whose life has radically changed. So has the life of her daughter Emmy, who is now a grown woman. Perdziola walked us through his designs for these characters.

Perdziola confessed that his design for Nora's dress is a "straight up steal" from the House of Worth. The couturier was established in Paris in 1858, and women traveled from around the world to purchase their dresses there. Perdziola reminded us this was a time well before ready wear existed.

Perdziola didn't select this design in a vacuum, though. When developing his costumes, he becomes familiar with the people who will wear them. He creates sketches and watercolors of his ideas. His initial instinct was to dress Nora in black. Director Peter Amster vetoed this choice because he felt black would be too severe given the play's comedic elements. So instead, Nora wears a rich maroon.

Perdizola noted that the original House of Worth design included a petticoat, which he has eliminated. "It doesn't change the way the story comes out," he said with a laugh. Kate Hampton/Nora will, however, wear a corset. Perdziola was quite funny when he talked about this component of costume design. "You have to figure where the excess 'skin' will come out," he said. It's a dilemma with which any woman who's worn Spanx is familiar. (I suspect it's not an issue for Hampton.) 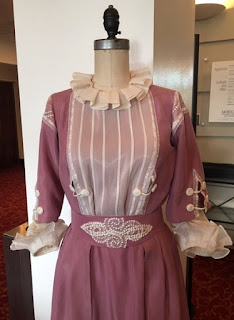 Perdziola and Amster also had slightly different views about how to portray Emmy. To Perdziola, Emmy is a free thinker; Amster considers her a bit old-fashioned. Perdziola's challenge was to design a dress that would bridge this gap.

Perdziola turned to the House of Paquin, another French fashion house established in the 19th century. (As an aside, according to Wikipedia, Jeanne Paquin was the first major female couturier and set the stage for the modern fashion business. You can read more about her by clicking here.) Olivia Osol, who plays Emmy, is not burdened with either petticoat or corset.

It is worth noting that while Perdziola's designs were inspired by the Houses of Worth and Paquin, respectively, the dresses were built in-house at Asolo Rep.

I would be remiss if I didn't mention that Perdziola also designed the minimalist set for the show. Playwright Lucas Hnath has said he envisions the set as more a forum where a battle will take place than a genteel living room. Building off this concept, Perdziola has created a sparse design whose curved lines mimic those of a Roman forum.

As always, getting the inside scoop on the design of a show will enhance my viewing pleasure. While not a design issue, I'm also fascinated by the fact that David Breitbarth and Kate Hampton, who play Torvald and Nora, are spouses in real life. I'm betting their relationship will bring an exciting depth to the characters. Unfortunately, I have to wait until late March to find out.

To get tickets to see "A Doll's House, Part 2" (or any of the other shows in Asolo Rep's season), click here.