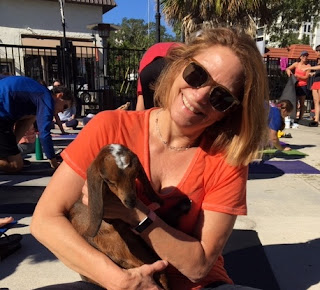 My only apprehension about taking a goat yoga class was the smell. I've stopped to pet goats while cycling through Nova Scotia or visiting a farm to buy cheese and, well, they kind of stink. So I was envisioning taking a big inhale as I lifted my arms to the sky and choking a bit. Should I wear some Vicks Vaporub under my nose like cops do at crime scenes?

Happily, the goats brought in for the special class at Pineapple Yoga Studio were odor-free. I laid down my mat to stake out my space on the patio and hurried over to the large bucket to check out the baby goats. The little ones had been born just eight days earlier and were highly adorable.

As someone placed a baby in my arms, there was a chorus of "oh no's" and laughter. When I turned to see what the commotion was, I saw that a wandering goat had pooped and peed -- on my mat.  I clearly had been worried about the wrong thing.

One of the yoga studio owners hurried over with a broom and swept up the poop pellets. Paper towels were used to sop up the liquid, which he assured me was "just water." He said something about goats expelling water rather than urine when they drink a lot too fast, but I wasn't buying it. I was happy I'd brought my (disposable) outdoor yoga mat for the session -- and that they had another mat I could use.

Despite perfect weather and skilled instruction, it was a bit hard to focus on the poses with the goats roaming around the yogis. How could I not look when peals of laughter erupted across the patio? Or giggle when Claudia gave instructions not typically heard, like "Don't be alarmed if you feel a little hoof on your butt" or "Lower yourself down all the way to your mat--BUT ONLY IF IT'S CLEAN" or "Goats will be goats." And then there was the moment when I was in a high plank position and a baby goat scampered underneath me.

Yoga always makes me feel good, but this class brought my joy to a new level. In addition to the pure fun of the morning, the session was a fundraiser for Pineapple Yoga Studio's community programs. These projects include Juvenile Detention Yoga, Yoga for Sustainable Recovery from Addiction and Mindful Yoga for Parkinson's Disease. For more information about Pineapple Yoga Studio and its community programs, click here. 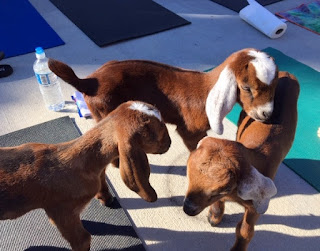 As for the goats, they came from Yolkers Wilde Dairy Goats. Glenna Roberts, one of the owners, told me she got her first goat when she was nine years old. She's lived on the property where the business is located for 31 years. Originally, they raised goats just for the fun of it. She was pleasantly surprised when she learned she could make a living out of her passion.

Glenna favors Nubian goats, which are known for their long ears. Their farm is home to between 60-70 goats at any time, not counting the babies. They eat approximately two tons of feed/month. Sadly, the goats aren't regular participants in any yoga classes despite their clear aptitude.

Thanks to Pineapple Yoga Studio and Yolkers Wilde Dairy Goats for hands-down the most hilarious yoga class I've ever taken.