When Summer Dawn Wallace asked if I'd moderate the discussion with Martyna Majok for Urbanite's Modern Works Festival, I started to sweat -- and it wasn't just because we were in a 105 degree hot yoga studio. Sure, I've interviewed lots of people for Florida Weekly and The Partnership for the Arts' podcast. But never in front of an audience -- and never a Pulitzer Prize winner.

For those not in the know, the 33 year old Majok (pronounced MY-oak) won the 2018 Pulitzer Prize for Drama for her play Cost of Living. Locally, Majok was awarded the $30,000 Greenfield Prize at the Hermitage Artist Retreat last April. At the Greenfield Awards Weekend, Urbanite's Brendan Ragan directed some excerpts from Majok's work. Their friendship was launched, paving the way for Majok's appearance at the Modern Works Festival.

Despite doing copious amounts of research, my nerves were jangling as the hour for the panel approached. My concerns abated the moment I met Majok. She is articulate and lively and funny and full of great stories. Our time together--both on and off the stage--was a blast.  Here are some of the stories she shared.

--The Pulitzer. Cost of Living tells the story of two mismatched pairs -- a former trucker and his recently paralyzed ex-wife and a young man suffering from cerebral palsy and his new caregiver. The play has been a bit controversial due to Majok's requirement that the disabled characters be played by disabled actors. To her, this just makes sense. But theaters have whined about not knowing any appropriate candidates to play the roles. (Majok is more than willing to make some introductions.)  She suspects theaters might see their way around this issue now that Cost of Living has received a Pulitzer.

Majok learned she was in the running for the Pulitzer when her agent called one morning to tell her she had won. Despite all the screaming in the background, she was sure he was making a joke at her expense. No, I didn't get that sequence of events wrong. The Pulitzer Committee doesn't inform people they're finalists for the coveted prize. (We now know that Cost of Living was up against The Minutes by Tracy Letts and Everybody by Brandon Jacobs-Jenkins.)  Her agent found out she won because he was watching the live streaming broadcast announcing the winners. How crazy is that?

Majok said she was a bit disappointed to find out the Pulitzer isn't memorialized with a medal. She had envisioned wearing her new bling proudly at all times, flashing it at traffic cops if she happened to get stopped speeding. She has reconciled herself to receipt of the official Pulitzer certificate -- and the check for $10,000. 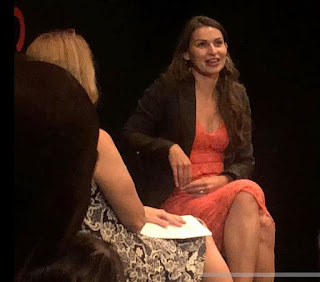 --Ironbound. Majok's breakout play was her 2016 Ironbound. The protagonist is a Polish cleaning woman who takes the audience on a ride through 20 years of her life as an immigrant struggling to make ends meet and to find love (in that order). The entire play is set at a bus stop in a gritty New Jersey town. It's based on the experiences of Majok's own mother.

Majok shared she was quite apprehensive when her mother accepted her invitation to come to Chicago to see the show. The last time her mother saw a play inspired by their lives they didn't speak for a year. The senior Majok felt violated to have the struggles she'd endured--including domestic violence--laid out on the stage for all to see.

Like the character in Ironbound, Majok's mother lives in New Jersey. She decided it would be just as easy to drive to Chicago as to fly. Majok told herself she'd disclose to her mother the play was based on her life as she drove west through Pennsylvania, then when she hit Ohio, then when they met in the lobby.

The conversation finally took place as they were settled into their seats and the lights were going down. "Oh, by the way, Mom, this play is based on you," Majok said with apprehension.

When the lights went up, there was no look of concern on her mother's face. "That character wasn't me," she told her daughter. Whew!  Majok said with a laugh that her mother's position changed as the play got traction. "That's me up there," she'd declare to perfect strangers going to see the show. 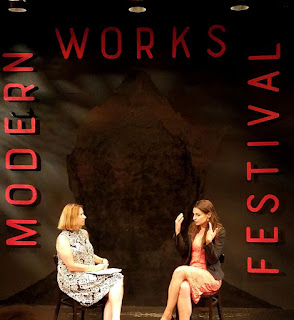 --Chernobyl. Majok herself is an immigrant, having moved from Poland to New Jersey with her mother and sister when she was five years old. Bytom, the town in which they lived, is 500 miles from Chernobyl. While this might sound like a sizable distance, radiation from the Chernobyl nuclear meltdown caused Majok's teeth to fall out when she was two years old. They grew back, but she continues to have dental issues to this day.

Needless to say, these events had an impact on Majok's life and writing. One of her current projects is a musical with the working title Prypiat. Prypiat is a town near the Chernobyl Nuclear Plant Site that was founded as a place where workers from the plant could live. It is a ghost town today. Majok told us some of the plant's former workers are moving back to Prypiat because they are treated as outcasts elsewhere. Her musical will tell these people's stories. She plans to go to the Ukraine as part of her research, but she's not sure whether she has the fortitude to travel to Chernobyl.

I feel so privileged to have met Majok and to have had the opportunity to facilitate her conversation with Urbanite's audience. She is a compelling voice in contemporary theater -- and she has a lot more to say. Majok is currently working on commissions for six plays and two musicals. Happily, Sarasota audiences will have a chance to see a staged "reading" in 2020 of the musical she's creating in connection with the Greenfield Prize. I hope I'll have a chance well before then to see some of Majok's work.