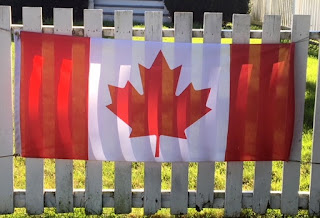 My friend Maggie is the queen of spreadsheets. She has a record of every theater production she's seen in her adult life -- complete with the cover of the program and lead actors. She knows when and where she and her husband Charlie bought every piece of art in their impressive collection. So it shouldn't have come as a surprise to learn she has a precise record of visitors to their Rochester home. On the occasion of my fourth visit to an area that has a surprising (to me) amount of cultural offerings, we headed up to Niagara-on-the-Lake for a couple of shows at the Shaw Festival. It was great fun.

Niagara-on-the Lake is cuteness personified. Its streets are lined with gorgeously maintained flower beds and boxes. Stores selling everything from clothing to jam to Christmas tree ornaments invite tourists in. And of course there are plenty of restaurants and hotels.

Between plays Maggie and I wandered down to the waterfront where the Niagara River meets Lake Ontario. We could see Fort Niagara across the river in New York. It's a bit shocking to realize that American soldiers used Fort Niagara as a launching pad for a major battle against Canada in the War of 1812. The United States at war against Canada? As part of the British Empire, Canada became our enemy during the War. The U.S. objective was to gain control of Fort George, which it did for a few months. When the British retook the fort, American troops burned Niagara-on-the-Lake (then Newark) during their retreat. Happily, there don't seem to be any hard feelings today.

History--and war--were also the themes in the Shaw Festival revival of Joan Littlewood's Oh What a Lovely War. Littlewood takes a hard--and often unflattering--look at Canada's participation in WWI.  The show is difficult to describe. While there's song and dance, it's definitely not a musical. It has skits, but I wouldn't exactly call it a revue. However you define it, the result was a powerful production we would never see at home.

Since we were in the area, a trip to Niagara Falls seemed in order. Maggie, of course, has been many times. But it was a first for me. I was overwhelmed by the Falls' beauty and power.

We took the obligatory ride on the Hornblower, the Canadian counterpart to the Maid of the Mist. Despite our complimentary ponchos, we got soaked. It was exhilarating. While I couldn't quite hear the audio guide, I believe we were told that water comes off the Falls at a rate of 600,000 gallons per second. That explains the mist and the noise level. We also learned the Falls have moved back approximately seven miles in the 12,000 odd years of its existence. A return visit is definitely in order during one of my future trips to Rochester. I am already looking forward to it.