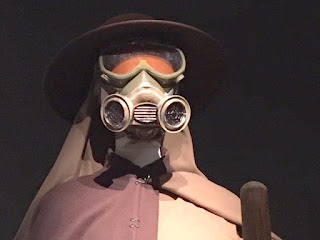 While the Pierre Cardin exhibit was brilliant, the real reason Sarah and I were at SCAD FASH was to see the exhibit featuring costumes from The Handmaid's Tale. "Dressing for Dystopia" includes 45 ensembles created by Ane Crabtree for the show. Like the show (and the book before it), the exhibit is chilling.

The difference in mood between the brightly lit rooms of the Cardin exhibit and the darkened rooms of "Dressing for Dystopia" was striking. The featureless faces emphasize the interchangeability of these people. The only face specifically identifiable was that of the pregnant Janine; it bore a scar where her eye had been gouged out. While the faces of the powerful in Gilead were also blank, they somehow seemed to have more stature. 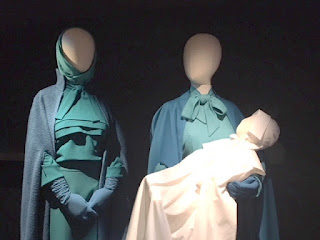 It was easy to identify specific episodes in which the costumes were worn. The exhibit began with the clothing June, Luke and Hannah wore in their attempted escape from capture. The glitzy dress and Playboy bunny outfit (complete with ears) worn by June and Moira at the brothel were on display. Rita and Nick stood side by side, and I could almost see the knowing look they exchanged. And in this tableau, I could feel Serena's envy as she admires the Putnam baby.

Every detail in the costumes has meaning, especially their color. Art history buffs won't be surprised to learn the blue of the wives' dresses is a reference to the Virgin Mary. Still, how creepy is that? 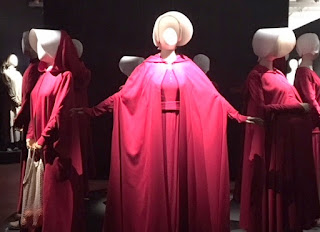 In an interview with Vanity Fair, Crabtree explains the handmaids wear red because, "Red is the colour of a womb, of a wanton woman, a scarlet kind of mark upon a pious world of dark tones in the visual landscape, and also in a tiny intimate space." (In case you're not up on the news, women protesting the Administration's stance on issues from abortion to immigrant family separation have taken to wearing handmaids' capes and caps. A sign from a protest last week read, "Give back the children you stole.") 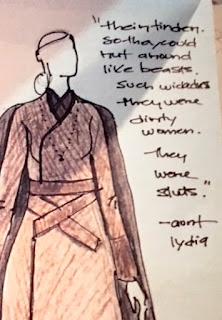 In addition to the costumes, the exhibit included a few of Crabtree's sketches. On some of her drawings, Crabtree included a quote from the script that seemingly provided inspiration for her work. Here Aunt Lydia says, ".....[So they could have] their Tinder. So they could trot around like beasts. Such wickedness. They were dirty women. They were sluts."  Seeing the written words felt almost like a slap across the face.

Click here for a fascinating article about Crabtree's thoughts on color and the cultural references she incorporated into the costumes. And for a more general interview with Crabtree -- and a look at some of her mood boards -- click here.

It would have been easy to spend an entire afternoon in the exhibit, revisiting plot lines and delving into the characters' motivations. But it was kind of eerie to be in the midst of this dystopian world. Besides, we had things to do, like catch up on the final episodes of Season 2 of The Handmaid's Tale.

"Dressing for Dystopia" is on display at the SCAD FASH Museum of Fashion + Film through August 12.