Three Things I Learned While Visiting the South Carolina Upcountry

My friend Pam didn't have to ask twice if I'd be interested in visiting them this summer. The beauty and cooler temps of the mountains versus the heat and humidity of Southwest Florida? I was booking my ticket practically before we were off the phone.

My experience in this part of the world had been limited to 24 hours in Asheville a couple of years back. So there was a lot to take in in my short time in the Upcountry. Here are three of my take-aways:

1)  There are bear in them thar hills.  Pam got my attention on the drive from the airport when she mentioned the coyotes, snakes and bears in the woods throughout their area. Recently, their dog Chase was fascinated with some baby cubs hanging out in a tree in their front yard.  Luckily, he kept his distance from both the cubs and the mama bear.

The Bears of Hendersonville are more my speed.  Each year, merchants sponsor a bear to reside downtown. Local artists are paired with the merchants to determine how they would like "their" bear to be painted.  In October, an auction is held at which the bears are sold. Half of the proceeds go to the downtown merchants association and half to a charity. (It wasn't clear whether the merchant or the artist choose the charity.)  Then the process starts all over again. 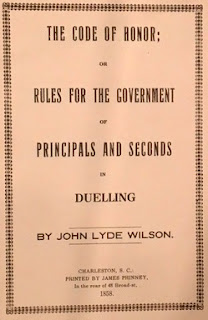 2)  The rules of the duel.  Aside from the wildlife, the Upcountry is a very civilized place.  I was fascinated by the section of the Upcountry History Museum in Greenville dedicated to the nullification "debate."

In 1828, Congress passed a law raising the fees on imported manufactured goods. This tax greatly affected South Carolina and other Southern states and was referred to as the "Tariff of Abominations."

Many in South Carolina believed states had the right to decide which federal laws were constitutional. Vice President John C. Calhoun, who hailed from South Carolina, secretly published a pamphlet in support of this view. In 1832, South Carolina called a convention and nullified the Tariff of Abominations as it applied to their imports.

Nullifiers and Unionists lived in discord as the debate continued. Benjamin Perry's pro-Union editorials in the Greenville Mountaineer stoked the flames. Turner Bynum's words in the pro-Nullifier paper, The Southern Sentinel, were equally passionate.

The two men met for a duel on August 16. Both men got shots off.  Perry's bullet hit Bynum in the hip, and he died of complications.

The rules for dueling were codified in 1858 in John Lyde Wilson's The Code of Honor: Rules for the Government of Principals and Seconds in Duelling.  If anyone could actually parse these rules, I give them credit.  Rule 1 reads, "The first offence requires the apology, although the retort may have been more offensive than the insult. Example: A tells B he is impertinent, etc.; B retorts that he lies; yet A must make the first apology because he gave the first offense, and then (after one fire), B may explain away the retort by subsequent apology."  At that point, the parties have the option to walk away or continue on with their fight.

The Code of Honor was the law of South Carolina until 1880, when dueling was outlawed. 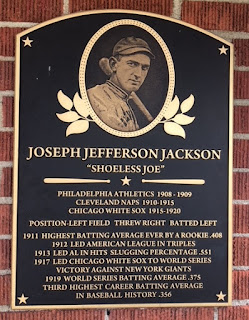 3) Shoeless Joe Jackson lived (and died) in Greenville. You don't have to be a baseball person to have heard of Shoeless Joe Jackson. Jackson was one of the Chicago White Sox players accused of accepting a $5,000 bribe to throw the 1919 World Series between the White Sox and the Cincinnati Reds. Interestingly, Jackson scored 12 base hits in the series, a record until 1964.

Jackson and his fellow players were acquitted of these charges in a trial in 1921. Nonetheless, the League imposed a lifetime ban on Jackson et al.

In case you're wondering, Jackson got his nickname when he took his cleats off during a minor league game and played in his socks. His feet apparently were sore from the previous day's activities.

Greenville is home to the Shoeless Joe Jackson Museum and Baseball Library, located opposite Fluor Field. Pam and I felt satisfied with a look at the plaque instead of a full-blown tour. Like Joe, our feet were a bit weary, and we had miles to go before we rested.