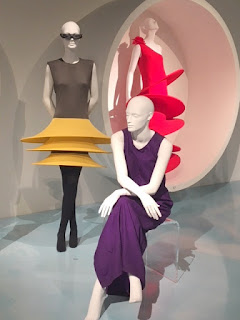 I have a bone to pick with Pierre Cardin. No, it's not that his couture would look ridiculous on me (even if I could afford it). In fact, to the point of cost, Cardin was the first couturier to create a ready-to-wear line of clothing for a department store. He was rewarded by being expelled--ever so briefly--from the Chambre Syndicate, the governing body for French fashion.

My gripe is that Cardin introduced the ubiquitous practice of putting his logo on clothing. He later expanded his branding by licensing his logo for items from pens to purses. Is sporting a designer's logo really a sign of good taste?

Now that that's off my chest, we can turn to Cardin's quite impressive contributions to the fashion industry. Sarah and I took in an exhibit of his mod work at The SCAD FASH Museum of Fashion + Film in Atlanta. (SCAD stands for Savannah College of Art and Design.) 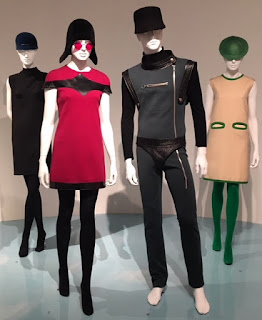 The exhibit included clothing from all seven decades of the designer's career, with a focus on his "space age" designs. Most of the attire is on loan from The Pierre Cardin Museum in Paris, although a few dresses came from SCAD FASH's own collection. Many of the mannequins are wearing hats, an accessory Cardin introduced to the runway.

Cardin was always one to push the envelope. "The clothes I prefer are the garments I invent for a lifestyle that does not yet exist -- the world of tomorrow," he said.

It's difficult to see in this picture, but the dress the chic mannequin in all black is wearing has a built-in cone bra. Sarah's memory immediately went to Madonna prancing around onstage in these bras. Jean Paul Gautier's creation--circa 1990--seemed so revolutionary at the time. In fact, the bullet bra dates back to the 1950s and is well-known to fans of Mad Men and movies featuring Jane Russell. An article explaining the genesis of the bullet bra noted the bras gave women's breasts a "missile" look. Perhaps that was what attracted Cardin to the concept. (To read the article -- and see some pretty hilarious pictures -- click here.) 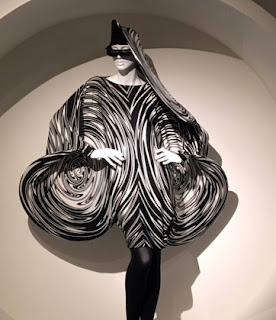 Sarah was generally much more observant than I was, noting as well (from a distance) the codpiece the male mannequin boldly wears. Wasn't that look from Shakespearean times?  Sadly, no explanation was provided.

Sarah also keyed in on the connection between SCAD FASH's circular displays in the exhibit and Cardin's Bubble Palace. Both recall Cardin's near obsession with the circle, as evidenced by his creation of the ever-so-flattering bubble dress. For a great article -- again, with fabulous pictures, this time of Cardin designs incorporating circles and the bizarre Palais Bulles -- click here.

This fabric in this dress makes heavy use of circles, but Cardin's larger goal was to create a kinetic effect. I can only imagine how dizzying it would be to watch a model twirling down the runway wearing this dress. Perhaps a dose of Dramamine was provided with your ticket. 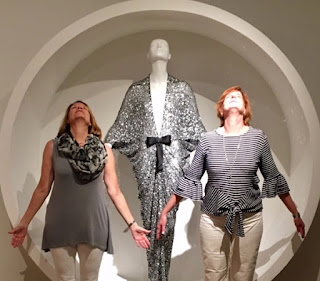 I don't mean to make light of Cardin's genius. His work was groundbreaking, and the exhibit truly was fabulous and a great deal of fun.

In fact, Sarah and I couldn't resist the urge to get in on the act. It was purely happenstance that we were wearing coordinating colors. Maybe in our next lives, we'll come back as fashionistas.

Pierre Cardin: Pursuit of the Future will be on display at SCAD FASH through September 30. For information about the museum and its exhibits, click here.