Photographer Clyde Butcher is often referred to as the Ansel Adams of Florida. His large-scale black and white landscape photographs--especially those of the Everglades--are an homage to the beauty of this natural resource. But what does his work have to do with the art of surrealist painter Salvador Dali? I set out to the Dali Museum in St. Pete to find out.

The Dali Museum commissioned Butcher to photograph the Costa Brava (or wild coast). This piece of the world in northeastern Spain is "where the Pyrenees meet the Mediterranean." It's also where Dali called home.

Never one for understatement, Dali said of his life there, "I lived like a nut...going into raptures in front of nature that is also art." So it comes as no surprise that the Catalan landscape had a significant influence on his art. 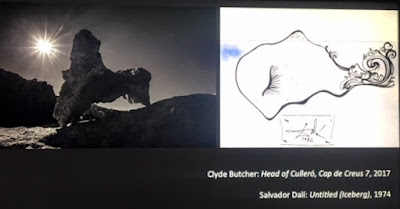 In addition to Butcher's photographs, the exhibit includes a slide show that juxtaposes some of Butcher's images with Dali's paintings of the same landscape. It was incredibly illuminating.

This pairing shows the relationship between the striking Head of Cullero in Cap de Creus and Dali's "Untitled (Iceberg)." Butcher's photograph is one of my favorites in the exhibit. But I just couldn't visualize the audio tour's description of how Dali saw this rock formation as a head balancing on its nose. Voila! No need for an imagination thanks to the exhibit's curators. 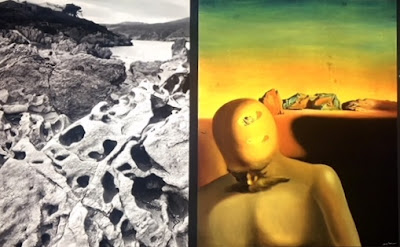 The exhibit also features a video of Butcher sharing his reactions to Dali's landscape. "I felt like I was dreaming," he said.

Butcher expressed his hope that visitors would  be able to relate more to Dali's paintings after seeing his photographs. It sounded a bit optimistic to me. But this pairing of Butcher's "Sa Costa des Camps d'en Gasanyes 1" with Dali's "The Average Bureaucrat" helped me do just that.

I learned that Dali loved exploring the pockmarked rocks of the region, delighting as he found little creatures and the like hidden in these miniature caves. Dali's bureaucrat similarly has concave areas in his head that hold seashells. The relationship between Dali's physical world and the world of his art hit me over the head like, well, a ton of rocks. (Note that Dali didn't intend this painting as a compliment to hard-working government employees like his father. Instead, the bureaucrat's niches are a reference to the empty-minded nature of these workers.)

I also was enamored of Butcher's pictures of Dali and Gala's home. I wasn't shocked to learn it has a number of unusual features.

Dali considered the egg a symbol of rebirth. To him, eggs also provide a connection with purity and natural processes and enable memories of the womb. (His memory was clearly better than mine.)

And so his home prominently features a number of egg statues. Why not?  Other atypical décor includes a stuffed lion in a grotto and a life-size Michelin Man by the pool.

Statues of the heads of Castor and Pollux sit proudly upon a garden wall.  The mythological twins were reputed to have been born from an egg, as were their twin sisters Helen of Troy and Clytemnestra.  While none of the Butcher photographs showed the brothers head on, the face of one twin is broken down the middle. I don't know my mythology well enough to know if that's a specific reference or if this was done at Dali's request.

I would be remiss not to mention a bit about Clyde Butcher and his process. He began shooting in black and white after his son was killed in a traffic accident. The mood suited him better. He also believes people focus on the image more in a black and white photo than one in color.

Butcher typically works with large format cameras. Schlepping a voluminous amount of equipment is just part of his process. But for his trip to Dali's world, Butcher decided to shoot with a digital camera.

This didn't, however, change Butcher's renowned patience for waiting for just the right light and composition (even if this requires standing for hours in a swamp). Unlike the way most of us act when our phones are opened to the camera function, he didn't "shotgun shoot." In fact, some days he took as few as two pictures. He reports using all but 20 or so of the shots he took during his visit.

Clyde Butcher: Visions of Dali's Spain will run through November 25. For more information about the exhibit and the Dali Museum more generally, click here.