Behind the Scenes of Other People's Money at FST

I was thrilled when Florida Studio Theatre announced it would offer a summer session of its Behind the Scenes program. What better way to escape from the heat and humidity than to plunge into another world?  In this case, some time travel is also involved as the show -- Other People's Money by Jerry Sterner -- takes me right back to the late 1980s when I was a baby lawyer.

The show revolves around the quest of "Larry the Liquidator" Garfinkel to acquire a company built from the ground up by existing management. Garfinkel makes no qualms about his intent. He's in it to make money. Jorgenson, the company's CEO, is all about people and jobs and community. Wall Street v. middle America? It sounded to FST like a theme that would resonate with audiences today.

FST is doing the show more or less as a period piece. After all, the script calls for phones with handsets and an old-fashioned stock ticker. A former stockbroker in the class noted the company's stock is quoted in eighths rather than pennies. But that doesn't mean the theater's artistic decisions have to be wholly in line with the time period.

A sound file with music for the show was made available with the script. Suffice it to say that the quality of the sound was as retro as the music. Director Jason Cannon was pleased to learn they weren't required to use it. 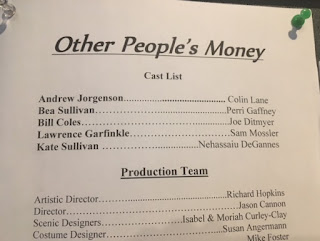 Casting Director James Ashford joined the class to talk about the audition process. Auditions are held both locally and in New York. Typically, only Ashford and Producing Artistic Director Richard Hopkins are in the room for the New York readings. As director, Jason took advantage of technology unavailable in the 1980s--Skype--to watch remotely.

Jason shared one of FST directors' tricks of the trade when auditioning over the internet: turning the sound off mid-way through a read by an actor who shows promise. FST stumbled upon this technique when a technological glitch thwarted an audition. While frustrating at the time, they realized the silent film approach helps them determine whether an actor's voice just sounds right or whether he or she can convincingly play the role.

Jason also shared that it takes about five seconds to determine if the actor will be called back. As a professional courtesy, people auditioning are always allowed their full time--usually 90 seconds or so--but decisions are made almost the moment the actor opens his or her mouth.

The script makes it clear that Garfinkel is larger-than-life in every way. When I inquired about how the casting call described him, Ashford reported the call was for "a large, overweight guy." While at least ten men set aside their vanity and responded, none of them filled the bill.

FST then thought of Sam Mossler, who commanded the stage last season in How to Use a Knife. He was invited to audition and was perfect for the role with one exception -- Mossler has trimmed down quite a bit. Happily, a fix is available. Mosler will wear a pregnancy belt to give him the required silhouette.

And speaking of costumes, I asked whether Kate, the 30-something lawyer in the show, will be boasting shoulder pads in her suits. (Having recently gone through old family pictures, I vividly remember the look. It wasn't pretty.)  I kind of expected just to get a laugh from the class at the memory. But it elicited a serious response from Jason and Literary Manager Catherine Randazzo.

The costumes for a show always have to further the story. Yes, authenticity is important. But so is making the actor feel right in the role. Kate needs to feel powerful and attractive. So whether--and what type--of shoulder pads she'll wear is to-be-determined based on her body and style. If only I had been so wise when selecting my own attire.

Other People's Money will run at FST from August 1-19.