What's in a Frame?

The Ringling Museum's Walk and Talk events never fail to amaze and delight me. I wasn't sure what
to expect from the session entitled "What's in a Frame?" But within minutes of Maureen Zaremba, Curator of Education, and Sarah Cartwright, Curator of Collections, introducing the subject, I realized I was going to come away with a wealth of newfound knowledge.

Framing a painting before hanging it for display wasn't always the custom. The practice developed in response to the inclusion of borders in frescoes and manuscripts. Today, frame history is a separate field of study.

It's unusual for pre-19th century paintings to live in their original frames. According to Zaremba, 98% of Old Master paintings have "new" frames. Similarly, the vast majority of paintings in the Ringling's collection were purchased by John Ringling (or, later, the Museum) with the frames in which they are displayed. The economics simply don't allow for re-framing unless a frame has been damaged or is entirely inappropriate. 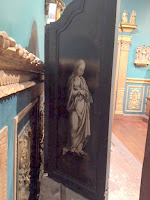 Not surprisingly, the frame on the triptych altarpiece above depicting the Angel of the Annunciation is not the original. But what is a bit surprising is that when the work was reframed, the center panel was cut down to fit the frame. While this sounds pretty outrageous, it's reflective of a period when artists were often considered mere craftsmen. Then there's also the fact that the frame--with its intricate carving and gilding--likely cost more than the paintings.

The frame is hinged, which allows it to close when the triptych is not on display. The back of the winged panels feature two grey grisaille paintings of The Virgin of the Annunciation. I suspect most visitors to the Ringling miss this component of the work.


The Gothic architectural frames on Virgin and Child and the accompanying paintings are reminiscent of the cathedral in which these works might have been displayed. The inclusion of elements such as the spires and colonnades evoke the period during which the artwork was created. The frames also convert the paintings into a sacred space, pulling the subject further into the "heavenly realm."  The way the gilding would have captured the light in a dark, candlelit space would have only accentuated this impact.

Interestingly, these works were painted by three different artists. Altarpieces were often chopped up into discrete pieces of artwork in order to be more collectible. British art dealer Joseph Duveen created this triptych by combining these similarly themed works and framing them in a coherent style before selling it to John Ringling. (For a short read about Joseph Duveen's lasting legacy to the art world, click here.)

Even in the Ringling's collection, there are frames that just aren't right for the painting. Zaremba and Cartwright showed us this work -- yet another annunciation -- as an example of a dealer going overboard with the frame. Talk about bling!

These paintings were created in the 1620s to hang over an arched doorway. They were not, however, intended to be framed in this manner. In fact, the canvases are different sizes and were originally hung at different heights, with the Virgin slightly higher than the angel. The work was reframed in the 1980s in this controversial manner. The sheer surface area of the brightly gilded arch overpowers the quiet paintings. This is one work the Ringling would love to reframe (again) if it had the funding. (Nobody in our group stepped forward with the $100,000+ donation required.)
﻿
Our survey also included Gainsborough's Portrait of Lt. General Philip Honywood. (While the paintings themselves weren't the topic of the session, it was noted this is believed to be Gainsborough's largest painting -- it measures 10.7' x 9.8' -- and his only equestrian painting on which the rider is mounted.)  The frame is elaborately carved and gilded.  It shows significant wear, with the wood showing through in many places.

Cartwright shared that, despite the damage, this is one frame she wouldn't want to replace even if the economics made it feasible. It just suits the painting too well.  She noted that damage to a frame can affect the decision to lend a painting to another institution. The inevitable jostling involved in the process makes it too risky. On occasion, travel frames are created for painting -- at the expense of the borrowing institution.


A shout out is due to the Ringling's Education Department for continually bringing such interesting programming to its patrons.  If you're in the area, there's a Walk and Talk on May 24 featuring new works on loan in the Museum's Center for Asian Art. I'm particularly looking forward to hearing about the Japanese Art Deco works.