The Power of Women: The Female Persuasion and Vox 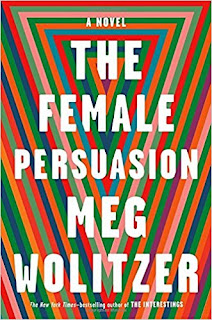 Much has been written about Meg Wolitzer’s The Female Persuasion, with good reason. It’s a wonderful book, filled with passages that had me reaching for my post-it notes.


The novel is essentially a coming of age story of one Greer Kadetsky. When we first meet Greer, she’s a freshman at a mid-level college. While she’s incredibly bright and thoughtful, she’s “selectively and furiously shy” with all but her closest friends and her boyfriend Cory. Greer doesn’t understand this aspect of her personality.
“It makes no sense, because I am stuffed with opinions.  I am a piñata of opinions,” she tells Cory. (One thing I hadn’t heard about Wolitzer’s book is how funny it is.)
Over the course of the novel, Greer comes into her own and finds her “outside voice.” What makes the novel so appealing is that her development is attributable in large part to being taken under the wing of Faith Frank, a feminist advocate/author/personality. Faith is a person to whom other people are drawn. The reason seems clear. She’s smart, passionate, caring and encouraging. She's both a dynamic speaker and a great listener. Who wouldn’t want to be in her orbit?
As Greer says of Faith, “She took me in and she taught me things, and more than that she gave me permission. I think that’s what the people who change our lives always do. They give us permission to be the person we secretly long to be but maybe don’t feel we’re allowed to be.”
The Female Persuasion is a tribute to the power of female friendship and mentorship. And with the feminist undercurrent running throughout, it’s a reminder of the importance of speaking out. 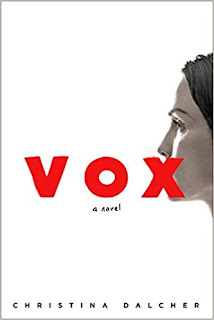 Which brings us to Vox by Christina Dalcher. Reading these books back-to-back (quite coincidentally) made each of them even more powerful.
In Vox, Dalcher imagines a world in which females – even young girls – are restricted to speaking 140 words a day. They wear counters on their wrists to monitor their communication. The penalty for exceeding the limit is a powerful electric shock. Those who continue to violate the rules face even more draconian consequences. (In case you’re thinking the limitations could be circumvented through sign language or note writing, think again. Cameras have been installed in every home and in the outside world to ensure compliance with both the letter and the intent of the law.)
We are never told how the U.S. government came to impose such a regime. But we do know the extreme religious right has gained the ear of the White House. And much is made of the rabble rousing of Jackie Juarez, a radical women's rights advocate whose books have titles like They Will Shut Us Up: What You Need to Know about the Patriarchy and Your Voice and Shut Up and Sit Down, Barefoot and Pregnant: What the Religious Right Wants You to Be. Her angry diatribes--regularly seen on TV before the restrictions were imposed--sound nearly unwatchable. She turns out to be prescient.
While you might expect Jackie to be front and center in the story, the book's protagonist is Dr. Jean McClellan. Jean's specialty is neuro-linguistics. She also happens to have been roommates with Jackie while in school. When the President’s brother has a brain injury that scrambles his ability to comprehend language, Jean and her team are called upon to resume their research to find a cure – pronto.  Jean and the other women on the team are relieved of their counters for the duration of the project.
The story has lots of twists and turns until it comes to what felt like a rushed ending. It’s derivative in some ways – The Handmaid’s Tale was never far out of my mind.  But if you are a reader of dystopian fiction, this is one book you won’t want to miss.
While the world of Vox seems far-fetched in the extreme, today's political landscape is pretty unbelievable as well. At several points in the story, Jean bemoans what's happened to the country.
“Not your fault,” a colleague says.
But Jean doesn’t agree. She thinks to herself, “My fault started two decades ago, the first time I didn’t vote, the umpteen times I told Jackie I was too busy to go on one of her marches or make posters or call my congressmen.”
The message isn’t subtle, but point taken. Mid-term elections are coming up. It’s an opportunity to make our own voices heard.