My last outing to Sarasota as a non-resident was a doozy -- Terrence McNally headed up a panel discussion about Asolo Rep's upcoming production of Ragtime. I have associated McNally with shows like Love! Valour! Compassion! and Lips Together, Teeth Apart. But his list of credits is extensive and also includes Kiss of the Spider Woman,Master Class and, yes, Ragtime.

Dramaturg Paul Adolphsen moderated the discussion by the accomplished panel that also featured Asolo Rep Producing Artistic Director Michael Donald Edwards, director Peter Rothstein and choreographer Kelli Foster Warder. Not surprisingly, Adolphsen's first question was directed to McNally. "How did 'Ragtime' come to be?" he asked. And with that we were off and running. 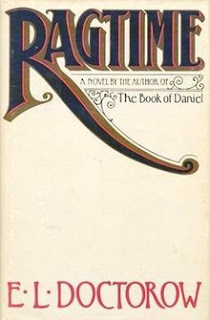 More than 20 years ago, producer Garth Drabinsky approached McNally about adapting E.L. Doctorow's classic novel into a musical. McNally was intrigued, but he wanted to read the book again before committing. It only took one night.

"Ragtime is one of the easiest reading great books," he said. "And it's one of the musical novels I've ever read.  It cried out to be made into a musical."

McNally told Drabinsky he was in on one condition. He would write a treatment outlining his vision for the show. If Doctorow signed off on it, great. If not, he would wish Drabinsky luck and move on to something else.

Doctorow approved McNally's 60 page treatment in short order. The project was on.

McNally said he realized how important it was to get the right director and composer for the show. Many musicals are put together based on resumes. But combining people based on the number of Tony Awards on their mantels doesn't necessarily create good theater.

It wasn't a difficult decision to bring in Frank Galati as the director. Galati had made a name for himself as an ensemble member of Steppenwolf Theatre and an associate director at the Goodman Theatre. Edwards commented that Galati was a "remote iconic figure" to him at the time. Today, he is well-known to Sarasota audiences for his direction of shows at Asolo Rep, including this season's Rhinoceros.

McNally proposed something a bit unique for finding the composer and lyricist -- a blind audition. They received seven cassette tapes (it was the '90s after all). Tape D--submitted by composer Stephen Flaherty and lyricist Lynn Ahrens--was the unanimous winner. In fact, four of the five songs on the tape ended up in the show, including "Wheels of a Dream." As an aside, McNally noted some of the submissions were from pretty big names at the time. But their identities won't be revealed until McNally's archives at the University of Texas are made public after his death.

"It was an unusual birth of a musical," McNally noted. But it worked.

The production -- with a cast of 50+ actors and a full orchestra -- opened in 1998. The show received 12 Tony nominations and won in four categories, with statuettes going to McNally for best book of a musical, Flaherty and Ahrens for best original score, Audra McDonald for best actress in a musical and William David Brohn for best orchestration. McNally shared that, despite the musical's success, its investors didn't quite make back their money.

As to whether Ragtime will resonate in today's world, McNally commented that its themes of racism and xenophobia are more relevant than ever. But the novel -- and, presumably, the musical -- don't leave you with a feeling of despair.

"The nature of the novel makes you aspire to be a better person," he said, "And proud to be an American."

In Part II of this blog, I'll share Rothstein's approach to paring down the musical to a manageable size without being reductive. McNally said he is excited to see this re-envisioning of Ragtime. That makes two of us.