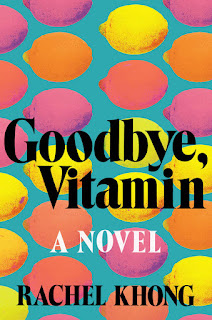 A book about a 30 year old woman who takes a year out of her life to help care for her father--who's suffering from dementia--sounds pretty depressing. And if your own father bears some resemblance to Ruth's dad, well....  But I trusted Wendi's judgment that the book wouldn't put me in a funk. And I'm so glad I did -- "Goodbye, Vitamin" by Rachel Khong is a real treat.

Khong's debut novel is written in diary form and had me reaching for my post-its by the second entry, dated December 26. As part of her Christmas present, Ruth's father began sharing pages from a notebook he'd kept about her since she was a small child. The first page he showed her read:

"Today you asked me where metal comes from.  You asked me what flavor are germs. You were distressed because your pair of gloves had gone missing. When I asked for a description, you said: they are sort of shaped like my hands."

Each entry from her father's notebook -- doled out over the year -- is a gem.

In another early entry, Ruth talks about a family photo that caught her attention -- a picture of her father and uncle with her just hours after she was born. Her father is wearing a black and white patterned t-shirt. The waistband of a pair of red pants just peeks into the photo. Inexplicably, her uncle is shirtless and, because of the angle, it seems he might be naked.

The story behind the photo had become part of their family lore. Uncle John had arrived at the hospital wearing a red shirt. Ruth's father was outraged. He had learned his newborn baby might be able to see red, black and white (hence, his outfit). What if baby Ruth got confused and bonded with her uncle instead of him? He insisted his brother strip off his shirt for the visit and -- good brother that he was -- he complied.

As the book progressed, I realized it was not about her father losing his memory, but about memories more generally. As Ruth settles back into her childhood home, she runs into all kinds of characters from her childhood days. Memories of her younger years abound as she forges new relationships with old friends.

We learn her brother Linus' family memories are quite a bit different from Ruth's own. The five years he remained at home after Ruth went to college were filled with conflict. While Ruth knew what was happening, hearing about it was completely different than living through it. Linus' anger makes him reluctant to spend time with his father, even during his decline.

Ruth's mother, of course, has her own perspective on her marriage and their family. And she's tired from struggling with her husband and his failing brain. But she's doing her best to help her husband at least maintain his mental status quo.

In one passage, Ruth says, "Mom's quit cooking, like a person might quit smoking or gambling." Not because putting food on the table has become too overwhelming a task, but because she's concerned that the "years of cooking in aluminum pots, cooking with canned good, led to the dementia."

And then there's Ruth's father -- a once brilliant professor who's just been put out to pasture due to his declining health. You see the struggle of this proud man every day, and your heart breaks just a little. In a wonderful storyline, his students come up with an elaborate scheme for him to teach a semester-long course unsanctioned by the college. They use classrooms whose professors are out sick and offsite locations with loose ties to the historical subject matter being covered. But no good deed goes unpunished.

Towards the end of the book, Ruth's diary mimics the notebook her father kept when she was a child.

August 1:  "Today you washed your shoelaces. Today you spoon-fed the neighbor's cat tuna from a can.... Today you disappeared again, and scared the shit out of us."