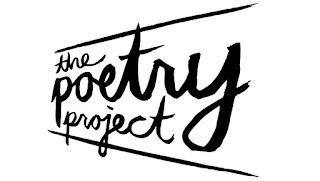 Poetry. Marathon. These are not two words you typically pair. And yet I found myself on a cold New Year's Day in New York at the 44th Annual Poetry Marathon sponsored by the Poetry Project.

The curated event runs from 2 p.m. until midnight or so, depending upon how close they run to schedule. Wendi and I headed to St. Mark's Church mid-afternoon and settled in. I was eager to see what the marathon was like, having heard about it for years from Wendi. While I'm not a poetry buff by any means, I'm intrigued by the genre. It's a true art to pack so much meaning into so few words. And besides, how bad could it be? If I really hated a poet, she'd be off the stage in two or three minutes, with the promise of someone great just around the corner.

It wasn't long before Nicole Sealey's reading of "The First Person Who Will Live to Be One Hundred and Fifty Years Old Has Already Been Born" grabbed me. It began:

"Scientists say the average human
life gets three months longer every year.
By this math, death will be optional. Like a tie
or dessert or suffering...."

I loved her language and sought out the young poet during a break to tell her so. (To read the entire poem, click here.)

The straight up poets were interspersed with musicians, some of whom played avant garde work, some of whom played beautiful music, and some of whom sang. I was taken aback by how, well, bad the Double Yews were. (Wendi and I later decided it was intentional.) But then I listened to the words they were singing -- "Pity the Nation" by Lawrence Fehrlengetti set to the tune of "My Darling Clementine." It began:

It hit me where I live. To read the poem, written in 2007, click here.  And to see the Double Yews' performance, click here.

There was plenty of humor as well. I laughed out loud at Joseph Keckler's "The 2012 Mayan Apolcalypse," which he partially spoke and partially sang in a truly incredible operatic voice. To see his performance, click here.

While I enjoyed the seven+ hours of performances we attended, what I was most struck by was the sense of community in the room. Some of the poets were clearly legends in their milieu -- the 90+ year old Jonas Micas, for instance, and John Giorno, who was the subject of Andy Warhol's 1963 movie "Sleep." Some were downtown personalities, like Tammy Faye Starlite, Penny Arcade and Edgar Oliver (whose faux Transylvanian accent threw me for a loop). And some were poets more or less getting their start. Their performances were universally listened to attentively by an appreciative crowd.  Even the woman who dressed up as a peanut, danced around and eventually ate some of the debris off the tarp that had been wisely laid down got a positive response. (Click here to see that performance, which I guess was some sort of take on the Peanuts' dance????)

I'll leave you with one of my favorite performances of the day. I was a bit baffled at the beginning -- was Tammy Faye Starlite actually exhorting this audience to be more supportive of he-who-shall-not-be-named? But then Starlite, backed by musician/writer Steve Earle, broke into a rousing rendition of The Stones' "Sympathy for the Devil." It was brilliant. Click here to see their performance.

After one taste of the marathon, I can see why Wendi has made it an annual tradition.