New York was bracingly cold, but the art scene this January is hot, hot, hot. Over the course of eight days, I hit seven museums – and wasn’t disappointed by any of the shows I took in. So a bit of sharing seemed in order.


Museums are rarely raucous, but the reverential tone of the galleries hosting the Michelangelo drawings exhibit at the Met was unlike any I’d experienced before. And why not? It’s not every day you get the chance to see beautifully preserved drawings created by a true master in the early 1500s.

Instead of hanging the drawings on walls, the Met displayed the works on two-sided stations. Each panel contained a single page of drawings and the accompanying description. This design allowed more people to view the works, but patience was still required. 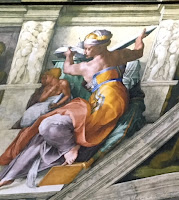 My favorite part of the show was the room featuring a one-quarter size replica of the Sistine Chapel with related preliminary drawings. The page on which the sketch of this Libyan Sibyl (prophetess) was done reveals Michelangelo’s frugality; he often drew multiple images on a single piece of paper.  Interestingly, the model was not a woman but one of Michelangelo’s male assistants. The torque in her body reveals an amazing musculature common among Michelangelo’s figures. While Renaissance art isn't really my thing, this exhibit was quite special.


From there I headed to the Met Breuer and the Munch exhibit. We all know “The Scream,” a subject Munch created on four separate occasions in different media. His “Sick Mood at Sunset: Despair” is viewed as a precursor to those works. Munch himself considered it part of the series.

The idea for the painting came to him on a walk along a road with two friends. The dramatic sky overtook him and he says he “stood there trembling with fright.” He then felt—rather than heard--“a loud unending scream piercing nature.” The resulting paintings have become some of the best known--and adapted--in popular culture. (Think Macaulay Culkin in "Home Alone.")

What I enjoyed most about the exhibit, though, was Munch’s self-portraits (or, as he called them, self-scrutinies).  I was struck by the variety of styles in his work, from naturalism to impressionism to symbolism. His “Self-Portrait with Bottles" isn't the type of artwork I associate with Munch with its bright colors and sense of happiness. But there it was, hanging along with a scream-like self-portrait in which he pictures himself in hell and a realistic portrait of himself as a 23 year old setting out to take on the world.

And here's a tidbit for you: Munch's work was seized by the Nazis during WWII when they stripped museums of art considered "degenerate." The term lumped together nearly all modern art, which--no surprise--didn't fit the German ideal.


Then there was“Modigliani Unmasked” at the Jewish Museum. The show explored the intentions behind the artist's distinctive faces.

Modigliani moved from Italy to Paris in 1905 when he was in his 20s. The mood in Paris wasn’t friendly to Jews. The aftermath of the Dreyfus affair continued to imbue the city with an anti-Semitism the artist had not experienced previously. Modigliani embraced his “otherness” despite an ability to pass as a gentile due to his appearance, cosmopolitan upbringing, and perfect French. He even went so far as introducing himself by saying, “My name is Modigliani. I am Jewish."


In African masks and sculpture, Modigliani found another people distinguishable by their “otherness.” He was also struck by the way the works combined abstraction with individuality. I hadn't seen any of Modigliani's sculptures before, and it was pretty exciting to view them--along with his paintings--next to examples of African masks and sculptures of the type he would have seen.

Modigliani's distinctive portrayal of his subject's noses is thought to combine his appreciation for African art and his identity as a Jew. One wall card noted plastic surgery began being used by people during Modigliani's lifetime to modify features – like noses – not considered traditionally beautiful. Modigliani would have been aware of this practice and objected to it.


Modigliani died at the age of 36 from tuberculosis. Quite fittingly, two of his fellow artists made a death mask before his burial. Unfortunately, they weren't skilled sculptors and removed the plaster mold prematurely and broke it. (One description of the mask attributes their haste to being rushed by a nun working in the hospital in which Modigliani had died. His bed was needed for other patients.) Sculptor Jacques Lipchitz was able to save the mask, and he eventually made several plaster replicas and an edition in bronze. To read more about the desk mask, click here.

These exhibits alone would have satisfied me, but more shows enticed me to brave the cold. Stay tuned for my report.