Howard Kunik is the man. Where else but in Punta Gorda can you find a City Manager leading a bike ride highlighting a town's history? The ride took place as part of Punta Gorda's Founders' Week. As a bonus, the monies raised go in the kitty for a new mural to be painted along the expanded Harborwalk underpass.

The ride began at the recently renovated Gilchrist Park. Renovated, that is, but for the new restrooms. As soon as Howard was introduced, someone from the crowd cried out, "Where's the toilet?" "We will be getting the restrooms," Howard assured the 100 strong group. "We are working on ideas until the permanent ones are in place." The question detracted a bit from the beauty of the new park with its double wide sidewalks that allow bikers and walkers to comfortably share the path. But members of Punta Gorda's famous Guitar Army, which meets in the Park every Thursday night, have a legitimate concern.

Howard's rides typically focus on ongoing projects in town. But we have to wait for his Pedal and Play ride on March 9th for that info. Instead, in keeping with the Founders' Week theme, each stop highlighted a bit of Punta Gorda's history.

As we prepared to head out, Howard noted the ride would not be an aerobic event. The focus instead was on safely getting the group from point A to point B, with police personnel on bikes and a motorcycle leading the way. (It was kind of cool to see a back up on 41 as cyclists crossed the four lane road.)

Our first stop was, quite aptly, the History Park. Margaret Bogardus, President of the Punta Gorda Historical Society, met us there to share some tidbits about the buildings in the park. I'd heard most of the stories before, but the haunted house tale was a new one.

Each year, the Historical Society decorates the homes in the park for the holidays. Three years ago, the Price House was chock-full of glass Santa Clauses. Each morning when Gussie Baker entered the house to turn on the lights, she noticed a Santa or two had been moved. It was a mystery, not to mention a nuisance to have to reorganize every day. One morning, an aggravated Gussie cried out, "Whoever this is, stop it!" The empty house echoed. When Gussie returned the next day, all of the Santas had been broken. This year's decorations for the house are made of wood. 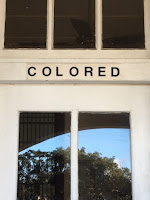 From there we were off to the Punta Gorda Train Depot. The depot, which is on the National Register of Historic Places, was built by the Atlantic Coast Line Railroad in 1928. Its primary use was the transportation of freight (mostly fish) to points north, but there was some passenger trade as well. Given the era, the station included separate waiting rooms and bathrooms for whites and "colored." Needless to say, the "white" area was a bit more comfortable. When the depot was restored, Bernice Russell was a member of the committee spearheading the project. (For those who don't know the name, Ms. Russell was a long-time African-American resident of Punta Gorda.) She made sure the segregated facilities were retained in the restoration as a reminder of the past.

Today the Depot is home to All Aboard The Last Stop Marketplace. For lack of a better description, I'll call it an antiques market. If you haven't been there since new management took over in September, check it out. The vendors have really interesting items, and the building has a totally different vibe after a good cleaning.

Howard arranged so many interesting stops on our ride that you'll have to wait for my next installment to read about the Fire House, Blanchard House, the Ice House and the new mural. And here's the real teaser -- I'll include my friend Bruce Tompkins' video of the ride which, as always, is terrific.