Portrait of a Bride: An Evolving Silhouette

I was not a girl who grew up dreaming of a fairytale wedding or a young woman who perused bride magazines. Despite my unromantic nature, I couldn't resist Leigh Ann Brown's presentation entitled "Portrait of a Bride: An Evolving Silhouette."

Brown's love of all things bridal more than makes up for my lack of interest. What started as a modest collection of antique and vintage clothing has morphed into more than 250 gowns worn by brides from the Civil War era through last year. Except for six gowns on dress forms in her dining room, the dresses live in a climate-controlled room in her home. (In case you're wondering, the gowns in the dining room are switched out frequently.) In her presentations, Brown walks her audience through history from the perspective of the women who wore the 20+ gowns she's brought with her for the day. It was fascinating.

Brown began with an interesting premise: The women's movement began not in the 1960s, but in the 1860s. Before the Civil War, women couldn't vote or speak in court without permission. If they went to finishing school, they were considered educated. That all changed with the war.

With all the men gone, women had to step it up. They realized that their poor little brains did, in fact, have the capacity to deal with finances and other "manly" matters. By 1870, mothers pushed their daughters to go to college and get the education they wish they'd had themselves. As Brown said, "the lid on top of them was suddenly open." 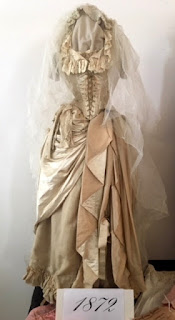 But women's clothing still held them captive. This 1872 bride wore nine layers of clothing beneath a gown with a high bustle that, as Brown said, "gave her a big old butt." Her waist was cinched to 19 inches thanks to her steel corset. Perhaps she even wore a sleeping corset at night for additional support. (Brown shared that she once wore a corset for a day "just for fun." When she removed the instrument of torture, she literally could feel her organs moving back into place.)

What, Brown asked, could we possibly have in common with this bride? As it turned out, she was a doctor, as was her husband. As Brown said, a world of possibilities had opened up for these women. 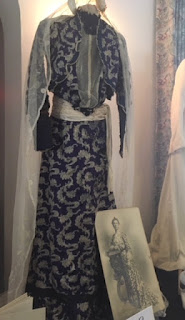 While the modern world associates the color white with bridal gowns, Brown told us this was not always the norm. Historically, economics--and common sense-- dictated that women got married in their Sunday best. The thought of spending serious money on a single-wear dress was a luxury most could not afford.  Blue was the most common color for wedding dresses. It was the color of purity, fidelity and the Virgin Mary. Have you ever wondered where the "blue" part of the saying "something old, something new, something borrowed, something blue" came from?  Now we know.

Brown's collection includes not only gowns, but pictures of the brides and other wedding items from shoes to guest books to invitations. So in addition to this 1903 gown, we got to see the bride looking a bit solemn as she embarked on her new life as a married woman. Brown noted this bride would have only been wearing six layers of clothing beneath her dress. Progress was being made. 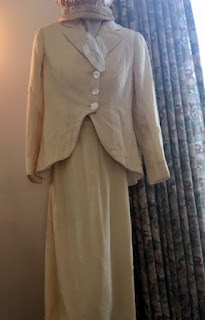 My favorite story of the afternoon was about the woman who wore this highly sensible wool suit as her wedding dress in 1913. George Pritchard was the son of a Titusville, Florida banker whose parents were eager for him to find a wife. Debutantes were paraded before him, but they just weren't the type of woman with whom he was interested in spending the rest of his life.

One morning the 19 year old George saw a suffragette literally standing on a soapbox in a park as she talked to passersby about the importance of women having the right to vote. George thought, "Now that's the woman for me!" At 27 years old, "Lovie" was considered a spinster and had likely reconciled herself to a life alone. Upon meeting, the couple immediately fell in love. And here's the best part of the story. The bride held suffrage rallies up and down the East Coast at each stop on their honeymoon decked out in her wool suit/wedding dress.

My head was whirling with all the history Brown shared. It was during WWI that women were freed from their corsets -- the steel in them was needed for the war effort. (Amazingly, until then, women actually wore corsets through the seventh month of their pregnancies.) All the layers had been shed as well, enabling women to work in factories and offices. 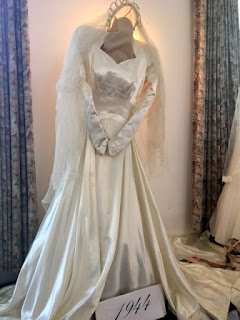 Brown took us from there through the Roaring 20's with a flapper style wedding dress to the huge skirts of 1939 thanks to Scarlett O'Hara and "Gone with the Wind." And while Brown's presentation carried on through 2017 (think 1960's mod gowns and 1990's Princess Diana look-alikes), I'll leave you with the story of a bride whose husband made it safely home from WWII.

When our groom deployed, he was a 19 year old lad in love with a 15 year old girl. Not surprisingly, her parents said she too young to get married. But she wrote him daily, and her letters helped keep his spirits up. He vowed he would make it home to her.

On D Day, he parachuted into Normandy. After a safe landing, he quickly grabbed his parachute and stuffed it into his backpack. He fought and lived to tell the tale. He came home and his parachute--made partially of silk--was used for her wedding gown. They were happily married for 54 years. Truly a tale for the ages.

Thanks to Leigh Ann Brown for a wonderful afternoon filled with stories of history and love. To see more of her collection, you can find her on Facebook by clicking here. If you ever get the chance to see one of her presentations, don't miss it.