Almost 40 years after "Evita" opened on Broadway, the mere mention of the show prompts people to start singing "Don't Cry for Me, Argentina." And is there a more iconic theater image than Eva Peron standing on a balcony with upraised arms exhorting her people to love her?

And so I was excited when I learned Asolo Repertory Theatre was kicking off its 2017-2018 season with the blockbuster musical. It should come as no surprise that I was front and center for the Costume Designer Brunch at which rapt theatergoers got a sneak peek at some of Evita's wardrobe for the show.

Brian Hemesath returned to Asolo Rep to create the costumes for "Evita" after designing the costumes for last season's production of "Guys and Dolls." He joined us via Skype as he was dressing Chance the Rapper later that day for "Sesame Street." (Hemesath has won two Emmys for his work as head of the "human" department of the show.) Also on hand were David Covach and Laine Marr from the costume shop. Hemesworth heaped substantial praise on them for making his sometimes outrageous ideas work.

Before putting pencil to paper, Hemesath talked with director (and choreographer) Josh Rhodes about his vision for the show. The approach would not be that of a documentary, but the story of an ambitious woman searching for fame.

"The costumes have to do a lot of work," Hemesath said. They do, after all, have to reflect Eva's journey from a girl of 15 to one of the most famous people in the world.

A lot of work translated into a lot of costume changes in the show. The most amount of time actress Ana Isabelle has to get out of one outfit and into the next is two minutes. Some of the changes happen onstage, in full view of the audience. Some serious rigging was required.

Perhaps the craziest transformation takes place during Evita's "Rainbow Tour" of Spain, Italy and France. During this one number, she wears three different outfits. The concept seems nearly impossible to execute. This is where Laine Marr came in. She laughed as she said it took about six weeks to figure out the logistics for the design. With all the rigging, the outfit weighs in at approximately 10 pounds at the outset of the number.

At the beginning of the song, Evita wears a dress with a black top and a cream-colored skirt with diagonal pleats cinched at the waist. The dress was inspired by the work of Christian Dior, the fashion-forward designer with whom Peron had become associated. A fabulous black hat seems to defy gravity as it perches at a precarious angle on her head.

As Evita "travels" from Spain to Italy, the skirt comes off with a quick spin and her outfit becomes a long black dress--and veil--appropriate for a meeting with the Pope.

In the final portion of her journey, Eva arrives in France. With another spin, the black skirt comes off to reveal a simple cream-colored skit. A jacket is donned, along with a wide-brimmed hat. Magnets in her wig and the hats help with these quick changes, which had to be "actor-proof." After all, the people responsible for making these changes happen aren't professional dressers but actors whose job is to sing and dance.

And what would a chat about Evita's costumes be without a discussion of the Casa Rosada balcony scene dress (shown above)? Hemesath's original idea was for Evita's skirt to be six feet in diameter. When the team saw the narrow 20 step staircase that Isabelle has to negotiate, they realized that idea wouldn't work. The dress' impact instead is made by what Hemesworth called its disco ball quality. (We were cautioned not to get too near or we would find glitter on our persons for days. There's a reason it's been nicknamed the "Big Bad Silver Dress.") 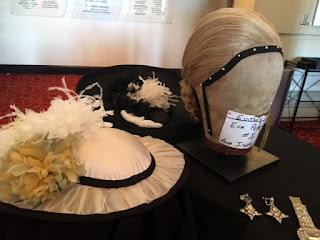 Covach shared a surprising bit of history about the Casa Rosada outfit with the audience. When it was announced Asolo Rep would begin its season with "Evita," Covach got an excited call from Jerry Wolf, head of the wardrobe department at the Sarasota Ballet. It turns out Wolf worked on the original Broadway production of "Evita" as the dresser for Patti Lupone's understudy. When the show closed, Wolf was concerned that the jewelry worn in the Casa Rosada scene would get lost. He considerately took it home for safekeeping.

The upshot is that the jewelry is again gracing the stage in Asolo Rep's production. "I think I can still smell Patti Lupone's sweat on it," Covach said with a laugh. 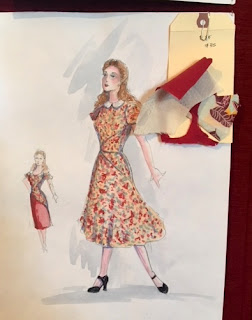 With this background, I was looking forward to seeing the show more than ever. But I still wasn't expecting it to be so fabulous. From Evita's spectacular entrance to the stunning sets to the use of video to the dancers (who almost stole the show), it was theatrical perfection. And I haven't even mentioned the music, the actors and, of course, the costumes. I want to see it again.

For more about Asolo Rep's production of the show, click here.  The fulsome program includes great interviews with Hemesath and director/choreographer Josh Rhodes and lots of background about Evita and Peronism. There's even audio of the Behind the Scenes session at which dramaturg Paul Adolphsen chatted with Rhodes and music director Sinai Tabak.

"Evita" runs through December 30. If you're anywhere near Sarasota, this is one show you don't want to miss.
at November 24, 2017