As anyone who knows me knows, the Chalk Festival is pretty much at the top of my list of must-see art events. After all, where else can you find both fun and beautiful paintings, talk with artists about their work and--here's the kicker--interact with the art?  (I'm always a sucker for these photo opps.)

This year's theme of "evanescence"--or soon passing out of sight or memory--could not be more appropriate. With the next hard rain, these artists' hard work will be gone. Festival organizer Denise Kowal told me some of the artists struggled a bit with the open-ended theme. It was more difficult to conceptualize than past motifs like Extinct and Endangered Species or Love and Peace. But they rose to the challenge.

As always, one of the most fun things about the Festival was experiencing the 3D paintings, like this hourglass. (Apologies to the artist, whose name I neglected to note in my excitement.) This type of art exists thanks to Kurt Wenner, the creator of what he calls "interactive 3D pavement art illusions." Interestingly, before he became a chalk artist, Wenner put his training at the Rhode Island School of Design to use at NASA as an advanced scientific space illustrator. 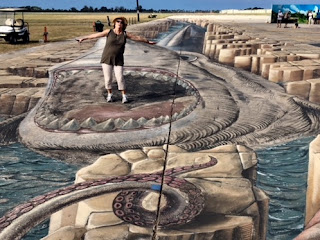 In previous years, Wenner has designed large-scale 3D artwork for the Festival. His 22,000+ square foot megaladon shark, painted with house paint rather than chalk, won a Guinness Book of Records title as the world's largest anamorphic pavement painting. Although it's been around for a couple of years now, visitors continue to put life and limb at risk by stepping into the shark's mouth.

Instead of a large 3D painting, Festival organizers tried something new this year -- a curated section of pavement art featuring high profile chalk artists from around the world. (Somewhat amazingly, the Festival secures visas for international artists and covers airfare and accommodations for all invited artists.) Not one to be left out of the fun, Wenner got back to his roots as he joined these other artists and painted a 12 x 12 square of pavement. 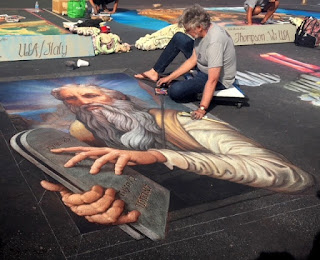 Constance and I had a chance to chat briefly with Wenner as he finished up his work. He shared that his image was a recreation of the very first street painting he did when he joined the ranks of the "madonnari" in Rome in the 1980s. As the name implies, many Italian pavement artists painted pictures of the Madonna. But other religious icons were represented as well, like Wenner's Moses thrusting the ten commandments at us. It would be interesting to compare Wenner's 2D and 3D versions.

Wenner told us his street paintings in Rome were often larger than the space allocated for the Festival. His work was well-received, and he often made $200/week in tips from appreciative passersby. When asked whether they got permits before putting chalk to pavement, he looked at me as if I were crazy. (Once a lawyer....) For a great Q&A with Wenner about working as a chalk artist, click here. His entire website is worth exploring. 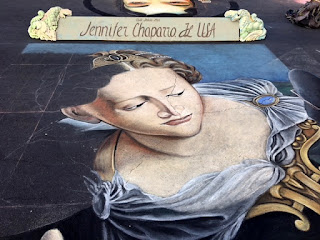 Another featured artist whose work I particularly liked was Jennifer Chaparro. Her Renaissance woman was just gorgeous. Like Wenner's Moses, the woman's hand stretched outside of the pavement to welcome viewers in. Because the work was neither finished nor in the designated 3D area, I didn't have the nerve to jump in and sit in the palm of her hand. But I was sorely tempted.

With so many great paintings on display, I can't resist writing a second post about the Festival. Stay tuned for the next installment.