The Art of Bruce Brayton


I wasn't in on the conversation when Robert threw down the gauntlet to a group of art-loving friends from Sarasota. "There's art in Arcadia," he purportedly proclaimed. "Would you be willing to make the drive to visit an artist's studio?"  The response was yes, but I can only guess there might have been some trepidation. Art in Arcadia?

Happily, I joined the Museums, Galleries and More Meet Up Group before their trek to visit Bruce Brayton's studio. A retired auto mechanic and machinist, the self-trained artist seems to have never met an art form he's not willing to try. When we stepped through his Pollock-like front door, there were sculptures and paintings everywhere.

A violin captured my attention. "What's the story with this?" I asked. Bruce said the piece was named "Second Violin" (pun intended). He explained the sculpture is made of aluminum and that it can actually be played. In fact, two professionals had played it in the past after tuning it to their own instruments.

I was surprised to learn one of these musicians was Janita Hauk, the Charlotte Symphony Orchestra's former maestro. To her ear, Bruce's creation didn't sound as nice and sweet as a wooden violin, but it was more than satisfactory. She ventured that the main thing the violin needed was some kind of amplification. Her opinions were shared by a bluegrass fiddler. Interesting.

Then we noticed a marble sculpture of two hands. It's an homage to Michelangelo's "The Creation of Adam." Unlike Michelangelo, Bruce used power tools to carve the sculpture. "I figure he would have used them if he had them," he posited.

Like many of the materials Bruce uses, the marble wasn't originally intended to be used by an artist. I wasn't aware of the VA's policy of making headstones for eligible deceased veterans. In this case, the family elected to go with something more elaborate. The already engraved headstone ended up in Bruce's studio. I suspect the fallen soldier wouldn't mind that his name was ground off in the process of Bruce creating his work. 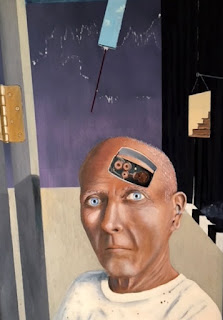 "Jackpot" (shown above) is also made of repurposed materials. The stainless steel rings were given to Bruce by a friend who works for a Texas oil company. The medium-size rings go for $300 a pop, but were no longer of use to the business. Bruce laughingly said it took him seven years and three days to make "Jackpot." It turns out he owned the rings for seven years before he came up with an idea how to use them.

In case you're thinking Bruce's work is limited to sculpture, think again. Paintings adorn his walls, including this Dali-esque "Self-Portrait with Open Mind." You can actually see the wheels turning in his head. Bruce declined to provide an explanation of this work.

Bruce held back the sculpture that was the group's collective favorite until the end -- the stainless steel "Bourree." When asked what inspired him to create the ballerina, he confessed to having been to the ballet once. "I couldn't believe how long they stand on their toes and hop around," he said. The dancers' athleticism clearly made an impact.

The dancer's body is modeled after a Mr.Thrifty skeleton that Bruce picked up along the way. It has received a thumb's up from several medical professionals. Each eyelash was painstakingly cut out and curled. The pose is taken from a picture in Suki Schorer's "Balanchine Technique," a text recommended to Bruce by the Sarasota Ballet.

Taking off his hat to reveal his bald head, he admits to having been stumped by the dancer's bun. His tutor on this point was a neighbor girl who gamely swept her hair into a nest atop her head. In Bruce's recreation, there are even stainless steel bobby pins to hold the bun in place.

Our outing to Bruce's studio was surprising and fun. And the next time the question comes up, we can now all say with authority that yes, there is art in Arcadia.