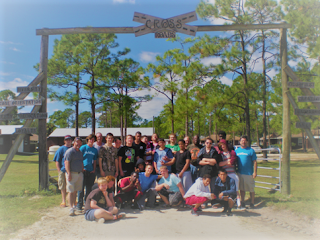 Crossroads Hope Academy is a non-profit home and charter school for boys aged 12 - 18 who have had multiple failed placements in the Florida foster care system. Since 2013, Crossroads has taken in more than 100 boys, providing a stable home and school environment as well as therapy and positive role models. Crossroads residents come to the facility with an average of 14 failed foster care placements; one child had had 64 homes in his young life. It's an amazing program. o

Crossroads is located off the beaten track, a good 30 minute drive from downtown Punta Gorda. But Hurricane Irma managed to find it. The residents pulled their mattresses off their beds and bunked down in the cafeteria for three days, venturing out only to take quick showers. It must have been quite frightening, with 130 mile per hour winds whipping around and water making its way into the facility. One shed lost part of its roof; a basketball hoop cemented into the ground was uprooted.

Bruce and Dorrit, like many people in our community, have a soft spot for Crossroads. When they heard about the damage, Bruce gave Executive Director John Davidson a call to see if he could help. An unexpected response came back -- "You can come out and make dinner for the kids one night," John said.

And so Bruce and Dorrit found themselves at Crossroads one Sunday night with coolers full of groceries and a tag-along helper.  It was a wonderful experience.

The sheer size of the task was daunting. Enough food was required for 30 people. During their visit to the Crossroads kitchen, Bruce and Dorrit learned that the budget for meals is $2.83 per growing boy. Unhampered by these financial constraints, Dorrit came up with a menu of baked chicken breasts with gravy, baked potatoes, salad, broccoli with cheese and, for dessert,  Klondike bars.

Bruce and Dorrit had planned the afternoon with military precision. Everything that could be prepared in advance had been done, and a timeline had been established for what to do once we were there. Dorrit tasked me with putting the salad together.  It seemed a safe enough proposition.

One of the best parts of the day was the assistance we received from Matthew, a 16 year old resident. We were so impressed with him. He was polite, well-spoken, focused, and helpful. He knew his way around the kitchen and had a better touch than one of us at seasoning the potatoes. (Really, who knew salt came out of its container that fast?)

The only snafu came when a church group arrived at the kitchen door with a meal already cooked and ready to serve to the kids. It was somewhat chaotic for a few minutes, but ultimately not a big deal. The delicious-looking meatloaf and sides were put in the frig for dinner the next evening.

When the meal was ready, the boys were called into the cafeteria. Their place in line was determined based on a behavioral point system. We were happy to see Timmy, the youngest resident at 12 years old, had a place near the front of the line. The kids were respectful and appreciative, and almost everyone came back for seconds. Some boys even wanted more broccoli.

I came away with a greater appreciation for the Crossroads program and why it has gained such support in our community. As an aside, a post-hurricane fundraiser at the Punta Gorda Isles Civic Association raised an astonishing $21,000. Kudos to everyone involved in putting that event together.

To read more about the Crossroads program, click here.  And to watch the inspiring video that Bruce made for Crossroads, click here.