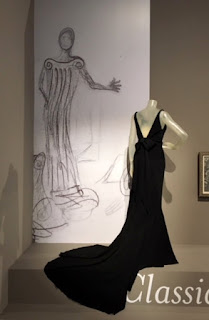 No one would ever accuse me of being a slave to fashion trends. And haute couture -- forget about it. But when fashion becomes art, it's a whole different story. And so I made a beeline to the Dali Museum in St. Pete when the Dali & Schiaparelli exhibit opened. It's a blast of a show.

The exhibit starts off tamely enough, with an elegant evening dress. The work ties in nicely with the detail from Dali's "Architectural Figures." Both Dali and Schiaparelli (known as "Schiap") believed in the importance of mastering traditional forms before letting their imaginations run wild. Like the old masters, Dali often used mythological figures in his paintings. In these adjacent works, Dali and Schiap pay homage to the way fabric is draped in Classical Greek sculpture. The primary innovation in Schiap's gown (circa 1931) was the use of rayon as the material. 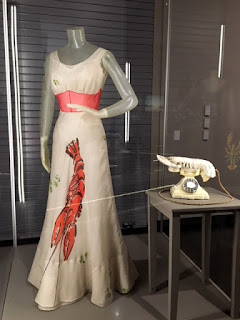 As I turned the corner, things started getting a little crazy. I tried to view the exhibit in the order the curator envisioned, but I couldn't stop myself from skipping ahead to the case showing Schiap's lobster dress next to Dali's surrealistic Lobster Phone.

Both Dali and Schiap were fascinated by the creature whose structure inverts that of humans with its hard skeletal exterior and soft interior. The sexuality lobsters evoke--with their lush meat often eaten with your fingers--wasn't lost on the pair either. In fact, Dali's Lobster Phone is sometimes known as the "Aphrodisiac Phone."

Perhaps the craziest thing about Schiap's Lobster Dress, though, is that it was made for Wallis Simpson. Yes, the Wallis Simpson whose husband abdicated the English throne to marry the twice-divorced American socialite.

Dali proposed that the dress (and its wearer?) be served with a dollop of mayonnaise. Schiap thought the placement of the lobster between Simpson's legs was suggestive enough. "Fashion both exposes and hides one's identity," Schiap said. This dress seems like the perfect case in point.

Another similarity between Dali and Schiap was their connection to the world of the rich and famous, including bombshell Mae West. Dali used West's lips as the design for this red couch. Schiap designed West's costumes for the movie "Every Day's a Holiday." When Schiap resisted traveling to Hollywood for the actress' fittings, West had a dress form of her body made and shipped to the designer. "Shocking," Schiap reportedly declared upon its delivery -- and promptly turned West's measurements into the shape of a bottle for her new perfume of the same name. Dali created some of the advertising for the perfume. 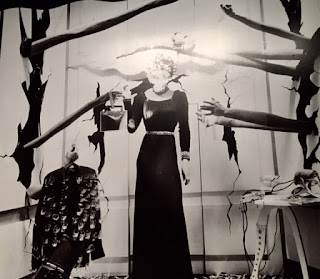 The wall-sized pictures of department store windows designed by Dali and Schiap were a special treat. In 1936, Bonwit Teller used Dali's sketches to create a surrealist window for the flagship Fifth Avenue store. (The showcase coincided with a Dali show at the Museum of Modern Art and a one man show at a New York gallery.) Written on the glass were the words "She was a Surrealist woman. She was like a figure in a dream." The display included Dali's famous "Aphrodisiac Dinner Jacket" with its 55 shot glasses seemingly filled with crème de menthe. (Who knew the powers of this after-dinner liqueur?)

Dali wasn't, however, happy with the store's execution of his vision. Merely voicing his concerns didn't seem sufficient, so he snuck into the window to rearrange the display. Unfortunately, he managed to shatter the glass while there, leading to his arrest for vandalism. 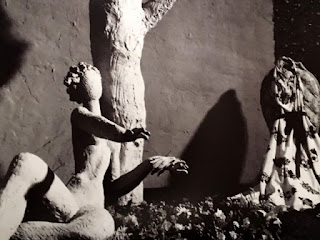 Schiap's own experience with window displays wasn't without controversy. She was invited to participate in the 1937 Le Pavilion de L'Elegance & Exposition. And she was happy to do so -- until she was informed about the requirement to use the official mannequins for the window. Unhappy with the mandate, Schiap included the mannequins as instructed -- nude. Her gowns were draped over nearby chairs. The crowds apparently went wild.

I could go on and on about this exhibit, but it's best experienced first-hand. The shows runs through January 14th.


I'll leave you with a Schiap quote to ponder: "Fashion has little to do with the length of a hem. It has much to do with the politics and social spirit of the time."

And now it's time to get dressed.