The Graybar Hotel by Curtis Dawkins

What's in a name? Or, more on point, does the identity of an author matter?

"Heather" by Thomas Eccleshare was one of my favorite shows at the Edinburgh Fringe Festival this year. The play was about a reclusive author who writes a series of Harry Potter-esque books that become wildly successful. The editor's attempts to meet face to face with the author are repeatedly put off. Ultimately, it is revealed that the author is in prison for a crime that involved killing at least one child. The dichotomy between the persona the writer had created and the real backstory was jarring. It also threw a major wrench in the editor's PR plans. The publishing house went from celebration to crisis mode in minutes as it anticipated the backlash once the news got out.

And herein lies the question -- If the stories were that wonderful, does the author's identity really matter?

The use of nom de plumes by writers is a historic practice. Sometimes pseudonyms have been adopted by authors who want to try a different genre. More frequently, however, they've been used by writers who feel their work would be better received under a different name. Women have often published under a pseudonym -- Amantine-Lucile-Aurore Dupin as George Sand, Mary Ann Evans as George Eliot, and all three of the Bronte sisters to name a few. More recently, J.K. Rowling used initials rather than her first name (Joanne) because her editor thought the young male audience she was targeting would be more receptive. (Rowling doesn't have a middle name, so she took the "K" from her grandmother's first name.) And then, of course, there are all sorts of other "cultural" reasons why an author might publish under a name different from the one given to him at birth. Don't get me started on that. 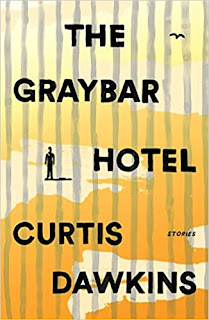 The reason I've been thinking about nom de plumes is I just finished "The Graybar Hotel" by Curtis Dawkins. While the book of short stories was not published under a pseudonym, the author's identity has caused some controversy. The book jacket states as innocuously as possible, "[Dawkins] has been incarcerated since 2004 for a drug-related homicide for which he's serving life without parole."

Some states have enacted laws prohibiting criminals from personally profiting from a nonfiction work that describes their crimes. No matter how you feel about this prohibition, it wouldn't be applicable to "The Graybar Hotel." Dawkins' short stories have nothing to do with his crime. Instead, the collection invites the reader into the life of an inmate in a Michigan prison. And having graduated from Western Michigan University with an MFA in fiction writing, Mr. Dawkins knows how to tell a story.

Our unnamed protagonist's universe isn't populated by the shiv-bearing, gang-raping criminals popularized on television and in the movies. Sure, violence sometimes lurks in his stories, but it seems avoidable if the inmate walks the straight and narrow. Much of our narrator's life involves staving off boredom and loneliness.

Television is a big part of the inmates' lives. In "County," our protagonist talks about the enjoyment of watching "The Price is Right" from his cell in the suicide watch wing. "I looked forward to seeing Bob Barker up there, and hearing Rod Roddy calling people to come on down. For an hour a day I could live in a world full of lights and color, noise and smiling women gracefully highlighting things with the near-touch of their hands.And hope.The hope for a good outcome kept me transfixed."

In "A Human Number," inmates make phone calls--collect--to random numbers in hopes of connecting with someone on the outside. A surprising number of people actually accept these calls. And in "The World Out There," the interior life of a young woman in the stands at a Detroit Indians baseball game is imagined in great detail.

Each story adds another layer of nuance to the complexity of an inmate's life. Dawkins' writing style suits the subject matter. It's unsentimental but well-crafted. And, not surprisingly, the stories more or less ring true. It's a prime example of a writer writing about what he knows.

But to get back to my original question. Does the identity of an author matter? In this case, the controversy surrounding Dawkins' history is what drew me to "The Graybar Hotel." Without it, I probably never would have heard of the book, much less read it. And knowing that he's written about the life he's leading lends the book a sadder quality than it might have otherwise. And so my answer is a decided "sometimes." I'd be interested in knowing what you think.

To read about Dawkins' life and his crime (included in the NY Times' review of the book), click here. And, in case you're wondering, the proceeds from the sale of "The Graybar Hotel" are being deposited in an education fund for Dawkins' three children.