Let me preface this post by saying my heart goes out to everyone impacted by Hurricanes Irma and Harvey. These devastating storms caused so much damage, and I am thankful my friends, family and community all came out on the other side more or less unscathed.

My personal story of surviving Hurricane Irma is, again thankfully, one of mere inconvenience and embarrassment. (Yes, embarrassment, but we'll get to that.) So consider this post a bit of comic relief.

I didn't live in Punta Gorda in 2004 when the Category 4 Hurricane Charley took an unexpected turn and blew right into town. It caught people unprepared and wreaked havoc. Our downtown was decimated. Many people--including residents of my condo complex--lost their roofs, exposing their homes to the rain and wind. It was a disaster, but Punta Gorda has come back stronger than ever.

This experience explains in part the mass freak out and, then, exodus that took place once Hurricane Irma started bearing down on Florida, despite the fact it was heading for the East Coast. I sat at home bored, watching lots of TV and wishing the storm would just get on with it (ideally after taking a sharp turn out into the Atlantic).

My sister Suzanne lives on the East Coast near Boca Raton. Her family headed to Atlanta. While their home is quite sturdy, they too had experienced a Category 4 hurricane--Wilma--and didn't want to take any chances. (Due to circumstances way too complicated to explain here, Suzanne, Drew and Jakie found themselves with two other families on a chartered jet for the trip up. Jakie was kind of digging the whole flying thing.)

But the fickle Irma took a turn west. On Friday, evacuation in my area of Punta Gorda was recommended due to concerns about storm surge. Still, I sat watching TV (although I did make plans to go to Bruce and Dorrit's on Saturday to weather out the worst of the storm). Most people would have started thinking at this point about what to bring with them if they had to leave their home, but my ostrich imitation remained intact.

When I woke Saturday morning, a mandatory evacuation notice had been issued. Storm surges--which are measured from dry ground--of 9+ feet were predicted for our area. Punta Gorda Isles is a community built on canals, so there's water out my back door. It sounded pretty grim. Susan and Steve had already jumped in their car and started driving north. Bruce and Dorrit decided to go to a local shelter. With the storm now heading for us, I decided to go to Suzanne's empty house. Some neighbors had a key if I couldn't get in the side door.

I became a whirling dervish as I alternately brought as much furniture as I could to the second story and threw things in my car. This mixed media painting Susan created as a housewarming present came with me along with important documentation and a truly random assortment of clothing and family photos. I locked my door and left, wondering what I would come back to once the storm had passed.

The side door to my sister's house was jammed, so I stopped by Jennifer and Jarrett Cooper's house to pick up the extra key. I'd met the Coopers in passing, but didn't know them well. There was no time to linger as they were battening down their own hatches for a storm wider than the entire state of Florida. I got home and tucked in to watch the storm news.

I woke up in the middle of the night to a tornado warning and a text from Suzanne to fill the upstairs bath tub. This part is important, because I didn't realize power and water are separate systems in most homes. Having grown up with threats of hurricanes in a home with a septic tank, making sure you had enough water to flush your toilets was a big concern. Not so much in Parkland, but it's part of the hurricane ritual, and there is always a chance the water will go out as well. 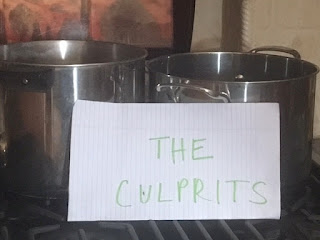 I went back to sleep and awoke to a dark house. I found a corner of the house protected by impact glass rather than shutters and watched the storm. Periodically, I'd talk to my family, and my mother encouraged me to bring some pots outside to catch more water. Being the obedient daughter, I did just that -- and the front door clicked closed behind me. I frantically tugged at it, but to no avail. Then I tried the side door, but I'd quite inconveniently locked it. It was raining and windy and I was outside. The only good news was that I was wearing shorts and a t-shirt rather than the nightgown I'd been out in earlier.

My only option was to walk the few blocks to the Coopers and, essentially, ask for the kindness of strangers. I appeared at their glass doors looking like a drowned rat and shaking with emotion. They threw their doors open and welcomed me in. I didn't immediately realize they still had power despite a graphic of Irma flashing on their big screen TV. Jennifer hustled me to their room to get me out of my wet clothes. I happily donned her one size too small yoga pants and t-shirt.  This was no time to worry about appearances.

And so began my next 24 hours at what their son Chase promptly dubbed "The Cooper Shelter." I couldn't have found a better place to wait out the storm. Yes, they lost power late that afternoon. But it was wonderful to be with other people rather than worry about what was happening on my own. The Cooper Shelter had previously welcomed in Jennifer's parents, who were refugees from Miami, so I wasn't alone in my concern about water levels. Despite my massive embarrassment at having locked myself out of my sister's house, I felt perfectly comfortable there. It was a human example of the rule of transitivity. The Coopers like my sister, my sister likes me, so the Coopers and I got along just fine. (Hopefully, my perception of their feelings is accurate!)

But the Coopers' generosity didn't end there. The next morning, Jarrett, their son Grant and I went back to the Peterson home to find a way in. Happily, only three panels of shutters had to come down before I found an open door. Jarrett also hefted the garage door open so I could get my car out at the appropriate time.  We'd learned overnight that Irma had come ashore at Marco Island and Naples, south of Punta Gorda, so the local storm surge had been minimal.  I later learned my condo development never even lost power. I was thankful beyond belief -- and never happier to step foot back in my house than I was on Tuesday.

So ends my Hurricane Irma saga. My sister gave me a postcard some time back that reads "Putting the whole hideous thing behind me by blogging about it." And so that's what I've done. Sadly, for thousands of others, the recovery process is much more complicated.