My Absolute Darling by Gabriel Tallent 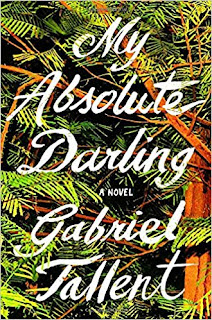 If you read much about hot new books, you've probably seen references to Gabriel Tallent's "My Absolute Darling." This debut novel has been on my radar screen since this year's Book Expo, when it was one of six books featured in the Editor Buzz panel. It's well-deserving of the attention.

Tallent sets the scene in the opening paragraphs. "The old house hunkers on its hill, all peeling white paint, bay windows, and spindled wooden railing overgrown with climbing roses and poison oak...The gravel drive is littered with spent casings caked in verdigris...In the living room, one window is boarded over, sheet metal and half-inch plywood bolted to the frame and covered in rifle targets. The bullet clustering is so tight it looks like someone put a ten gauge right up to them and blew the centers out; the slugs glint in their ragged pits like water at the bottom of wells."

Clearly, this is not a typical home, much less an appropriate place for a widower to be raising his teen-age daughter. But Martin Alveston and his daughter Turtle are not a typical family, and their relationship is not appropriate in any way. Turtle is the center of Martin's world, and he does everything in his power to ensure that he is the center of hers. He abuses her physically, sexually and psychologically. These scenes are graphic and difficult to read, but a crucial part of Turtle's story.

As time passes, Turtle is torn between her desire to break away from Martin and her love for him. She walks out of the house one morning and keeps walking. The wildness of Mendocino, where the book is set, is an environment in which Turtle is wholly comfortable. She contemplates whether she will return to her home as she walks. And then she stumbles upon Jacob and Brett, two local boys hopelessly lost on an outward bound type experience and as unequipped to handle the hardship as Turtle is capable of doing so.

"The boys talk in a way that is alarming and exciting to her--fantastical, gently celebratory, silly...She feels brilliantly included within that province of things she wants, lit up from within by possibility. ...A new world is opening up for her. She thinks, these boys will be there when I go to high school. She thinks, and what would that be like--to have friends there, to have friends like this?"

Turtle's introduction to Jacob and Brett is a turning point as she begins to truly envision a different life for herself. But Martin is not going to let her go easily. In a particularly terrifying scene, Martin burns a souvenir Turtle has kept from her time with the boys. He uses a poker to push around the remains.

"'You are mine,' he says [to Turtle], and swings the fire poker around and strikes her on the arm and she pitches onto her stomach in the mud, her left arm numb, her shoulder broken-feeling, and she tries to rise, gets one hand under herself and heaves up and he plants his boot on the small of her back and drives her to the ground. He raises the poker into the air and she thinks, get away, get away, Turtle, for your life get away, but she is pinned in place by his boot and she thinks, you have to -- you have to, but she cannot move, and he brings the fire poker down onto the back of her thighs, and she bucks, spasms..... 'Mine,' he says."

"My Absolute Darling" is not a book in which the issues are tied up neatly at the end and everyone lives happily ever after. How could it be? But it's powerful and well-crafted and feels honest in a way that's hard to explain. If you can bear the brutality, read it. It's a book you will remember long after you've finished the last page.