When Comedy is No Longer Funny 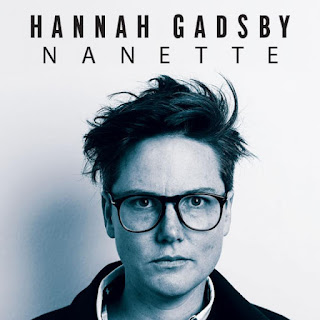 I knew going in that Hannah Gadsby's show "Nanette" at EdFringe wasn't going to be a total laughfest. I had read she would be talking about coming of age as a gay woman in Tasmania at a time when the country was debating whether homosexuality should be legalized. But in the hands of a skilled comedian, almost anything can be funny, right? And therein lies the rub. Having established a career making people laugh about the trials and tribulations of being gay, Gadsby is ready to step away from the mic and acknowledge that she's content with who she is.

Gadsby does have a lot of funny material, though. Like her objection to the assumption that all gay people love to party. "What about shy people who are gay and just want to stay home and read a book?" she asked with a look on her face that evoked laughter from the audience. "And what's with that flag? I'm all for gay pride, but those colors just don't work together. And I'm really not a parade kind of person."

Gadsby came out to most of her family many years ago. Her mother's response to the disclosure was something like it would be better if Hannah were a murderer. Really? Somehow, they've gotten past that and are now the closest of friends.

But Gadsby still hasn't come out to her grandmother. "Any boyfriends, Hannah?" her granny asked during a recent visit. "No, granny," she replied. Hannah realized her grandmother must know that she's gay and was providing an opening for her to talk about it. But, she says, she still carries a deep feeling of shame and just couldn't acknowledge her identity to her grandmother. My heart broke for her. 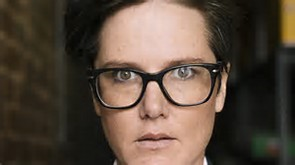 Gadsby says she's retiring from comedy after "Nanette" completes its run. Comedy, she says, requires tension as you set up the joke and then hit the pay-off. She feels there's enough tension in today's world without piling on. Plus, she said, she likes herself now. She no longer wants to bring a room of people together to laugh at her life.

Gadsby shared a story that she's opened many shows with. When she was 17, she got off a bus at the same time as a couple of lovebirds. The guy thought she'd been flirting with his girlfriend and approached her threateningly. Hannah has always been masculine looking, so it wasn't until he got in her face that he realized she was female. "Oh, sorry," he said as he backed away. "My mistake."  Cue the laughter from the audience.

But she now reveals that's not where the story ended. When the guy walked back to his girlfriend, she explained that Hannah must be gay because she had in fact been hitting on her. His principles no longer prevented him from going back and beating the shit out of her. Hannah found herself bloodied and alone on a street corner and feeling she had nobody to turn to. Again, my heart broke.

"Nanette" has been receiving international accolades. It was named Best Show at the Melbourne International Comedy Festival. It's nominated for the Best Comedy Show at the Fringe. The show was well-received in London and is heading to the Sydney Opera House post-Edinburgh.

To read some reviews of Gadsby's show, click here and here. And, in case you're interested, the woman who inspired the name of the show was a homophobic barista in Australia. And while I hope I bear no resemblance to this Nanette, I thank her for providing a name for Gadsby's show that resulted in my return to the Fringe. "Nanette" is just one of the performances I saw this year that will linger with me for a long time to come.