Let's face it -- Most people are not going to visit a town's historical society and pore through dusty tomes to learn about bygone days. But in Punta Gorda, our town's history is on display all around us, thanks to the Punta Gorda Historic Mural Society. Dave Bise and I had the chance to talk with Kelly Gaylord, President of the Mural Society, for our Partnership for the Arts podcast.  It gave me an even greater appreciation for the work of this organization.

The Mural Society was founded in 1994 by Dr. Bob Andrews after a vacation to Vancouver, Washington. He enjoyed learning about Vancouver's history through its murals. Why couldn't Punta Gorda capture its own history in the same way?  The City Council immediately embraced the idea, and it wasn't long before a mural featuring the Hotel Charlotte Harbor graced a wall of the Punta Gorda Mall.

I can hear some people asking now, "What mall?" Sadly, the mall -- along with the mural -- was destroyed by Hurricane Charley. In total, ten of the then 20 murals were destroyed by the storm. All but two have been recreated.  The Hotel Charlotte Harbor is now memorialized on the walls of the Charlevoi Condos through two murals highlighting the hotel's history.

Kelly explained that the Victorian-style hotel went through several iterations. It was built in 1886 when the Florida Southern Railway expanded into Punta Gorda. The Hotel Punta Gorda had 150 rooms and was the largest hotel in south Florida. (It only had four bathrooms per floor, though. Times have definitely changed.) The tower provided a vantage point for visitors like Winston Churchill and Teddy Roosevelt to view the river. Other famous guests shown in the mural include Clarence Darrow and Andrew Mellon. The hotel shuttered its doors in 1914.

In 1925, Baron Collier purchased and revitalized the hotel, renaming it Hotel Charlotte Harbor. The $250,000 in renovations corrected the bathroom deficiency and added two floors, with the fourth floor used by Collier as a personal apartment and the fifth floor featuring a glassed-in ballroom. The hotel's glory days lasted only five years before the Depression took its toll.  In 1956, the hotel was converted into a health spa that never operated in the black. It burned down in 1959 in a fire that could be seen for 25 miles.

Each of Punta Gorda's 29 murals conveys an equally interesting story. Happily, there are numerous ways to learn about them. You can, of course, do your own tour of the murals. Each mural now has its own QR code that allows people a bit more tech savvy than I am to easily access the information on the Mural Society's website. Better yet, you can take a class with Kelly at FGCU's Renaissance Academy. One version walks students through all 29 murals--450 years of history--from the comfort of their seats in the classroom. During the season, Kelly also offers a walking tour that covers more than 15 of the murals. Participants in these tours also learn about the hidden symbols embedded in the murals. Information about both options is available on the Mural Society's website, which can be accessed by clicking here.

And if you really get the mural bug, check out the Florida Mural Trail.  The trail was established a couple of years ago--thanks, in part, to Kelly's efforts--to celebrate this fun form of public art. To qualify for inclusion, a town only has to have a couple of murals, so be sure to check out the numbers before you hit the road. The more important criteria is an organization responsible for maintaining the art. Lake Placid, with 48 murals, is definitely on my list. 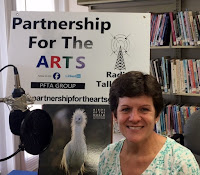 To hear Kelly talk about Punta Gorda's murals, including the new firehouse murals, listen in to our podcast by clicking here. (Just scroll down a bit and you'll get to the interview.)  She also talks about what's involved in the creation of a mural, from the funding to the painting.