Experiencing the Art of Hélio Oiticica 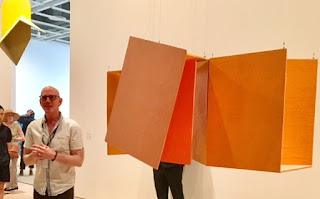 I glimpsed a nicely dressed barefoot patron when I stepped off the elevator on the fifth floor of the Whitney. This was my first clue that the

Hélio Oiticica: To Organize Delirium exhibit was going to be a bit different from typical museum fare. I walked around the galleries while waiting for the tour to start and was, quite frankly, baffled. Why were there people enjoying a game of pool? Why were people lying in hammocks with Jimi Hendrix playing in the background? It would all be revealed in due course.
Hélio Oiticica was the first artist to create happenings, our docent explained. My ears perked up at the term, which reminded me of a crazy "happening" my friend Danita and I stumbled into more than 25 years ago in California. I didn't know at the time that happenings are a type of audience participation performance art. All I knew was that it was fun.

Oiticica's initial works progressed from 2D to 3D to 4D (with the fourth dimension being time). Colors were moved off the plane of a painting and into the viewer's space. The colors change as you look at them from different perspectives. Some works allow participants--Oiticica's preferred term--to walk through them and move panels, adding another element for both the participant and the bystander. In today's art world, this might not seem particularly radical. But the concept was "mindblowing" when Oiticica introduced it in the 1960s. His approach is given further import when placed in context against the backdrop of Brazil's repressive military regime. Oititica's art gave participants a bit of control otherwise lacking in their daily lives.

As interesting as these works were, they were just the beginning. Participants became an even more integral part of the art with Oiticica's Parangolés. The pieces are "mobile sculptures" made of cotton, plastic, and other materials. I happily donned one but drew the line at dancing the samba as Oiticia intended.
Then there were the fully immersive pieces. Tropicalia is one of Oiticica's Penetrables, works that participants can literally walk into and experience. The ground was covered with sand, and the floor of each structure had a different texture--rocks, woodchips, even water.  (This piece explains the shoeless patron, although I don't think he was supposed to be wandering barefoot in other galleries.) A (live) parrot shrieked in the background.  Plants enlivened the landscape.

Our docent once again put the work in context. "Think of 1960s London where Tropicalia was first introduced," he said. "Men who visited museums wore suits and ties and had to roll their pant legs up before wading in." I loved the visual.

Perhaps not surprisingly, cocaine became a big part of Oiticica's life. He used the drug frequently, feeling that it expanded his horizons. More intriguingly, he used the drug in his artwork -- literally.

Oiticica's fertile imagination envisioned nine "environmental pieces." Only five were realized during his lifetime, including a "nest" comprised of mattresses on which participants lie while listening to music and viewing pictures streamed onto the walls. Oititica intended for participants to file their nails while lying on the mattresses, creating cocaine-like flecks of white. (The Whitney skipped that component.)

But I preferred the hammock "cocoons" to the nests. The images on the walls and ceiling in the room were photographs on which Oititica had painted using cocaine for the pigment. Jimi Hendrix music enveloped us. It makes no sense, but the experience was extremely relaxing. In the hammock next to me laid a mother nestling with her small child. I felt like I could have rested there all afternoon, but I had places to go and people to see.

And so concluded another satisfying visit to the Whitney. Once again, my concept of art had been pushed beyond its previous limits with a knowledgeable docent leading the way. I loved it.