What's on My Nightstand

Unpacking the books I brought home from BookExpo was like opening a Christmas present I'd picked out for myself but couldn't quite remember.  (That's how we do it in my family, at least!)  I was immediately excited about most of my new books, although a few left me somewhat bemused.  Read on for descriptions of what's made it to my nightstand. 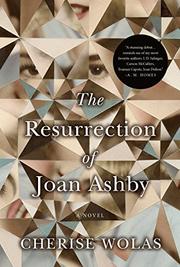 "The Resurrection of Joan Ashby" by Cherise Wolas (out September 12th). I was intrigued by this debut novel the second I opened its cover. The first page is an article from a literary magazine entitled "(Re)Introducing Joan Ashby." Ashby wrote two astonishing story collections in her youth, leaving readers anxious for more for over three decades. The article includes an excerpt from a notebook a 13-year old Ashby kept entitled How to Do It with nine precepts that would govern her life as a writer. Among them were "Do not entertain any offer of marriage," "Never ever have children," and "Never allow anyone to get in my way." Also included in this article are two excerpts from stories she wrote.

Not surprisingly, Ashby's life didn't go quite as she had planned. I was immediately engrossed in the plotline, but it's the excerpts from her stories and other writing that are truly phenomenal. Part II liberally quotes from her interrelated stories about a character named Simon Tabor. I ratcheted up from my usual flag noting a passage I like to a large post-it on which I scribbled, "I desperately want to read this story collection." I wrote Wolas' editor to find out if a book of stories was forthcoming. (Sadly, unbelievably, it's not. Surely she wrote more than just those excerpts, given how incredibly vivid and compelling they are.)

I finished this the last--534th-- page of "The Resurrection of Joan Ashby" yesterday wanting more. I loved it.

"Mrs. Fletcher" by Tom Perrotta (out in August). I am a fan of Tom Perrotta, with the exception of his "The Leftovers" about the rapture. (I apparently was in the minority, since this book was adapted into a hit HBO series.) His latest features Eve Fletcher, a divorcee struggling with empty nest syndrome.  Eve becomes obsessed with a seemingly errant text message she received that read, "U r my MILF!" (Like Eve, I have no idea what that means.) Simultaneously, her son is getting a bit off-track at college, as he struggles with an environment that challenges his white privilege background.  Time magazine has called Perrotta "the Steinbeck of suburbia."  I'm eager to plunge back into his world.

"The Twelve Mile Straight" by Eleanor Henderson (out in September). The premise of this book pulls me right in. In 1930 Cotton County, Georgia, a white sharecropper's daughter gives birth to twins -- one black and one white. A field hand is accused of rape and, inevitably, murdered. Henderson's narrative envisions the aftermath of these events. Interestingly, Henderson's own grandfather was a sharecropper in south Georgia during the Depression. As a result, she grew up hearing stories of her father's rural youth. "When I began to imagine the world of Cotton County," she said, "I wanted to capture the innocence of these country stories and also to fracture it."  Count me in.

"The Golden House" by Salman Rushdie (out in September). Although I've never read Salman Rushdie, I've always been fascinated by him. You probably remember that his "The Satanic Verses," inspired in part by the life of Muhammad, prompted Ayotallah Khomeini to issue a fatwah against Rushdie that was in effect for nearly a decade.  And then, of course, there's the fact that he was married to Padma Lakshmi, perhaps the world's most gorgeous foodie. But I digress.

Random House characterizes Rushdie's latest novel as "equal parts The Great Gatsby and The Bonfire of the Vanities as it tackles contemporary politics and culture.  The book begins, "On the day of the new president's inauguration, when we worried that he might be murdered as he walked hand in hand with his exceptional wife among the cheering crowds, and when so many of us were close to economic ruin in the aftermath of the bursting of the mortgage bubble, and when Isis was still an Egyptian mother-goddess, an uncrowned seventy-something king from a faraway country arrived in New York City with his three motherless sons to take possession of the palace of his exile."  Whew!  I can't wait to see where this story goes.

"Grist Mill Road" by Christopher Yates (out in January). For me, no book list would be complete without a thriller. It was hard to overlook the blurb on the cover of this book from NPR's All Things Considered, which reads, "The highly anticipated new novel from the author whose [2017] debut was called 'the smart summer thriller you've been waiting for..'" Somehow I missed last year's hype over Yates and his Black Chalk.  But the quote did its job -- I was primed.

The first sentence of "Grist Mill Road" leaves no question about what kind of novel this is. "I remember the gunshots made a wet sort of sound, phssh, phssh, phssh, and each time he hit her she screamed."  What did leave a question--for me at least--was the description of the book as a "Rashomon-style tale." A quick Google search revealed this means a story told from the perspective of several different characters in an unreconcilable way. (The term derives from a 1950 Japanese film directed by Akira Kurosawa of the same name.)  It sounds like a great book to read with a friend so you can sort out what's happened when you get to the end.

By the way, if you're interested in getting a better sense of what BookExpo is like, click here to read an article I wrote about this year's experience for Florida Weekly. Happy reading!