I'm a sucker for pianists. While I enjoy the music, what really grabs me is watching their fingers fly up and down the keyboard in a seemingly effortless manner. So it wasn't a hard sell when my friend Tony Gil invited me to Sheraton Four Points to hear George Mancini's jazz trio play. Within moments of entering the room, I realized Mancini is the real deal. The time flew as I bopped along to jazz standards, with a ridiculously wonderful version of Duke Ellington's "Caravan" closing the show.

Dave Bise and I had the chance to chat with George for our Partnership for the Arts podcast. After a lifetime as a professional musician, George has more than a few good stories. But perhaps none is more interesting than how he got his start.

With a name like Mancini, it's no big surprise that George is Italian. Music is an integral part of many Italian families' homes, and the Mancini household was no exception. From an early age, George was introduced to classical music and opera. It was a given he would learn to play an instrument, but his parents left the particulars up to him. And so a five year old George found himself standing outside a music store with his mother looking over his options. "Which one do you like?" she asked. George confesses that he couldn't even name most of the instruments. But he was intrigued by the colors and buttons on -- wait for it -- the accordion. They marched into the store and bought a woman's accordion for George to play. (I love the visual of a five year old George hefting his new possession.)

But there was a hitch. George's hometown didn't have any accordion instructors. Undaunted, George's parents signed him up with a violin instructor and an organ teacher. Together, they figured it out. George says the experience taught him early that playing an instrument isn't about the mechanics; it's about the sound. It didn't take long before George's musical talents had drawn some attention. By the time he was eight, he was performing on a weekly TV show, playing his own take on whatever style of music was called for. 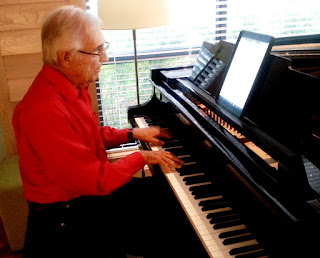 George's life as a professional musician was just getting started. A scholarship to a German university launched him into the international world of music (via a KLM propeller plane). Although he'd taught himself to play jazz piano, it was his first formal piano training. Later, he traveled the world as a clinician for The Hohner Group, showing off the versatility of the accordion. For more than a decade, he logged over 100,000 miles annually between his piano and accordion concerts and his work as a clinician.

Whenever George found himself in a location for an extended period of time, he took on students. Despite his success as a performer, his true passion is teaching. Language was never a barrier, a fact to which his German, Japanese and Dominican students will attest. Music, he says, "transcends nationality." And learning the accordion at the knees of instructors who didn't know to play the instrument taught him the importance of aural training.

George's unique educational experience has also made him a proponent of critical thinking, a skill he teaches his students through the techniques of music. He works with them on math and science as well as music. It's all interrelated, isn't it?

He tells a funny story about a kid who couldn't get the concept of tied notes. George had tried all of his usual techniques to teach the concept. Finally, he asked the student, "What do you think of when you think of tied?" "The detergent my mom uses to wash the clothes," the child replied. George laughed, took off his shoes, and tied the laces together. "This is the type of tied I'm talking about," he explained. It was a reminder for this veteran teacher about the importance of communication.

As you can probably tell, I've become a huge George Mancini fan. He's charming and incredibly talented and fun to watch perform. His trio--comprised of George on piano, Ron Harris on drums and Isaac Mingus on bass--appears every Monday night from 7:00-9:00 at Sheraton Four Points in Punta Gorda. No cover. Just stop in, grab a bite or a glass of wine and enjoy some great music. There's often a guest musician as well, sometimes one of his talented children (a story for another day) and other times one of his students.

And if you want to catch George on the accordion, he'll be performing this week with daughter Michelle Kasanofsky at Venice Theatre in her show "To All the Men I've Loved Before." (Michelle is the choral director at Port Charlotte High School and a fabulous pianist in her own right.)  Performances are on Thursday and Friday, July 20-21, at 8 p.m.  Tickets can be purchased by clicking here.

Last, but certainly not least, to hear our interview with George, click here.  (Just scroll down a bit to get to the interview.) I hope you'll enjoy listening as much as we enjoyed chatting with him.