Arts in Medicine at Shands Hospital

You wouldn't expect a program called Medical Grand Rounds to appeal to someone whose medical experience is limited to playing "Operation" as a kid. But the program's lectures focus on the connection between medicine and music and are presented in an accessible manner. As a bonus, the program supports our local Charlotte Symphony Orchestra through sponsorships by area medical professionals. Since its inception five years ago, the program has raised $125,000 for the CSO.

The most recent Medical Grand Rounds lecture featured Andrew Sanchez, a graduate of the University of Florida who's heading to Columbia Med School. While at UF, Andrew became involved with Shands' Arts in Medicine program.

Andrew was quick to distinguish arts in medicine programs from art/music therapy.  Music therapy, such as the work done by Dr. Oliver Sacks, is goal-oriented. A striking example is the work being done with non-verbal Alzheimers patients who respond to the music of their youth. By contrast, arts in medicine is process-oriented. Giving patients--and their families--the opportunity to listen to music or engage in an art project is a welcome distraction from dealing with whatever led to the hospitalization.

Andrew also noted the program "rehumanizes" patients in a time when they are referred to as "healthcare recipients" being treated by "healthcare providers." When enjoying music or art, patients are no longer defined by their condition. They get to just be people again, if only for a short time. And they regain some control by having the power to decide when and how they want to participate.

But I'm getting a little ahead of myself. First, a bit of history. Duke was the first hospital to launch an arts in medicine program in 1975. The program initially took the form of monthly concerts in a public area. (The CSO participated in this type of program last year when it performed a holiday concert at Golisano Children's Hospital of Southwest Florida.)  The idea spread, with the University of Iowa pioneering an aesthetic experience for patients with a focus on art and design.  UF's Shands joined in the late 1980s and is the first institution to have a formal artist in residence program. Today nearly 50% of hospitals have some kind of arts in medicine program.

The Shands program is quite expansive and includes everything from doing craft projects to collecting oral histories. Each area has artists in residence who are paid employees of the hospital. Their jobs include not only performing but auditioning volunteers and providing training. On the musical side, performers can often be found in public areas, including the tunnels between the pediatric hospital and the cancer hospital. Some patients get bedside visits from musicians like Andrew. (In case you're wondering, the instruments used in the program stay in the hospital and are sterilized before each bedside visit.) Andrew told us a bit about how he was trained to approach these visits. 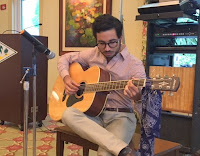 "It all starts with a knock on the door," he explained. The knock isn't random, however. Each patient's doctor has suggested that he or she might enjoy participating in the program. The musician then works to develop a rapport with the patient, explaining why he's there. The patient is given the opportunity to talk about herself and let the volunteer know if she's feeling up to the visit. If so, she's then given some choices. Andrew's repertoire isn't broad enough to permit song selection, but he does ask whether the patient wants to hear something fast or slow. (He performed examples of both for us, and his playing was a joy.)

To see a moving example of a bedside session, click here to watch guitarist Ricky Kendall with heart transplant recipient Jamal Davis. As you will see, Jamal happily gets in on the act.

While arts in medicine programs aren't goal-oriented, Andrew noted that positive benefits have been reported. Patients who participate in the program sometimes experience less stress and anxiety. Some require less pain medication. The medical professionals benefit as well, with increased job satisfaction and a greater sense of community. The programs are truly a win-win for all involved.

A huge thanks to Andrew Sanchez for taking the time to share his experiences before heading off to med school. I can't wait to find out what the Medical Grand Rounds series has in store for us next.